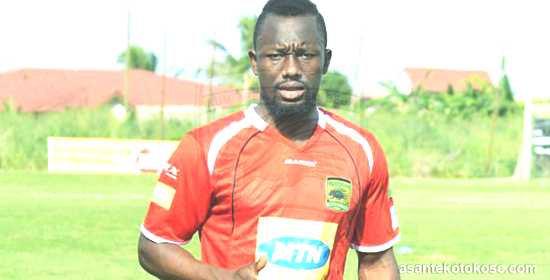 Kumasi Asante Kotoko Striker Sadick Adams has hit back at Hearts midfielder Samudeen Ibrahim for his post on Facebook mocking him after he collapsed during the Ghana@60 Match.

Samudeen went on his Facebook page to offer his sympathy to the striker after the game but decided to throw in a jab at the end which has sparked controversy.

He posted; “Soo sad to see a brother collapse on the field of play, speedy recovery Sadiq Adams I hope and pray u bounce back as quick as possible to continue from where u stoped, buh I guess now u knw the difference between inusah and atinga...lol”

Sadick Adams who has recovered well after receiving treatment at the Komfo Anokye hospital was not best pleased with the 23 year old’s antincs and has registered his displeasure.

The former Bechem United striker called Samudeen out on his ‘fake wishes’ and also went on to give him some pieces of advice.

”First of All I want to let you know I am fit and well now thanks for your fake wishes by the way...Also I have few advice to you as a bro

1.So you knew atinga was that but u eat and dine with him?

2.Get in mind you have been in the team for years and you dnt even know this wasn’t my first time playing against inusah.

3.i have safe two people life on the same field of play so dnt be surprised I was safe by someone else.

4.i was able to survive this but have u asked urself if it was u,will u be able to survive it?...last but not the least know how to write English, how to carry yourself, how to market yourself and of all how to act as a professional..Don’t follow Twi words to write on social media bro, you got a long way to go, is my advice to you...we all doing something that makes people happy for them to praise us but have you sat down and ask yourself. when we stop doing that will the same people be happy when they see us.? think !!congrats for winning it but the season is still young..”

The war of words between Adams and Samudeen doesn’t look to be cooling down any time soon with both men determined to have the last  word.

Ike 4 years ago
HOD of English ,pls your point number 3 is full of gramatical errors have u checked that? Masa give us a break