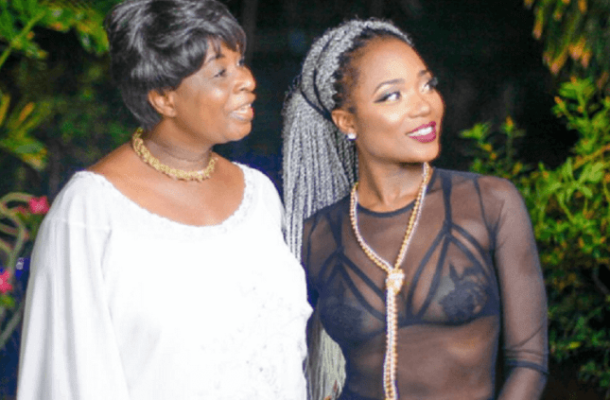 Mother of award-winning singer Efya, Nana Adwoa Awindoor, has appealed to critics of her super star daughter to cut down on the constant criticism as it is likely to affect her creativity.

The host of the long-running ‘Greetings from Abroad’ show, has indicated that she is disturbed that Efya is relentlessly criticised, adding that stories are deliberately concocted to defame the talented singer.

The Development Queen of Afigya-Kwabe District told Edem Knight Tay on the Home Affairs Show on Saturday that she does not want any of the negative comments to get to her daughter.

Efya has been in the news for allegedly dealing in drugs, which she has constantly denied. Also, the singer's bear-it-all fashion sense has also come under scrutiny.

But her mother said, "I don't want such comments to disturb her ability to explore and grow in whatever she has chosen to do."


"I rather look at whatever is being said positively as a mother and guide her accordingly...we seem to be so excited about things when they are foreign but the moment it is local we all go gaga about it," she added.

According to her, artistes abroad do all sorts of crazy things and live all kinds of lifestyles yet they are adored the world over as well as in Ghana for what they do and who they are.

"I am not saying I will allow her to walk around naked...my daughter knows the kind of upbringing she had and I sit her down to talk to her.

"I tell her 'let people appreciate your voice and other ability than to allow them to condemn you because of your outlook," Nana Awindor said.

Nana Adwoa Awindor believes her daughter deserves to be celebrated rather than condemned.