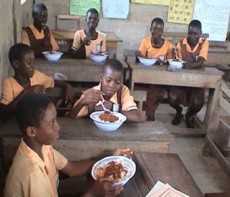 The Chief Executive Officer of the National Food Buffer Stock Company (NAFCO), Alhaji Hanan Abdul-Wahab, has urged heads of senior high schools and their matrons to reject low quality foodstuff delivered to them by food suppliers under the Free SHS feeding programme.

“Some suppliers, I am told either coerced or deceived school authorities to sign waybills when delivering poor quality commodities,” Alhaji Abdul-Wahab said in an interview, after he paid unannounced visits to some schools in the Upper West, Ashanti, Eastern and the Greater Accra regions.

He said henceforth, officials of NAFCO would make unannounced visits to public second cycle institutions as part of the company’s strategic reforms and warned that any supplier caught indulging in such acts would be handed over to the Ghana Education Service and the Ministry of Education for the appropriate sanctions to be applied to them.

He used the visits to obtain first-hand information on the implementation of the feeding programme and to find out the challenges associated with it.

He also interacted with the heads of the schools, the matrons, the kitchen staff and the students and also inspected their stores.

Ajhaji Abdul-Wahab said the NAFCO was concerned about food safety, quality and quantity and warned that the company would not hesitate to blacklist any supplier who compromised the quality of the food they supplied to the schools.

He announced that the NAFCO had set up a complaints unit at its headquarters, as part of monitoring and evaluating the programme, adding that the unit offered instant remedial measures on issues that could derail the success of the policy.

Alhaji Abdul-Wahab warned saboteurs of the programme that the company had intelligence units all over and would, therefore, deal with those indulging in malpractices.

“I am aware that there are conspiracies among some school authorities, suppliers and shop owners to sabotage the programme. We have information on instances where some insensitive school authorities conspired with suppliers to under-supply food items so that the unsupplied quantities are valued in monetary terms and the proceeds shared.”

In view of the development, Alhaji Abdul-Wahab said he told the authorities of the schools that he visited that those who had been engaging in such acts were being investigated and those found culpable would face the law.

he heads of the schools for their part, generally expressed satisfaction with the programme so far, saying that the suppliers were delivering according to requests made by the schools.

Some of them, however, expressed concern that some of the suppliers delivered substandard food items.

Generally, they complained of limited storage capacities, which restricted them from receiving large quantities of supplies.

At the Accra Academy, Alhaji Abdul-Wahab joined the students at the dining hall for lunch, during which he encouraged them to take their studies seriously, in order to become effective leaders who could take over running the affairs of the country.