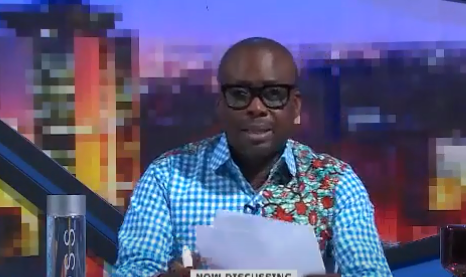 Paul Adom-Otchere, the host of Good Evening Ghana, has asked Daniel Yaw Domelevo, the Auditor-General not to overstep his bounds relating to his duties at the Audit Service.
He said, "...You're a great man Mr Daniel Domelevo but please don't overstep your bounds."

He indicated further that some of the Auditor General’s actions do not speak well of a person who wants to build a strong state institution like what Barack Obama told the parliamentarians when he visited Ghana in 2009.

Touching on Mr Domelevo’s letter to the Chief of Staff notifying her of his leave from February 8 to February 20, 2020, and stating that his deputy will take over from him, but will not attend board meetings, Adom-Otchere said, how can “any serious person who is an Auditor General, who wants to build institutions of state write such a letter”.

“You write a letter to the Chief of Staff, I’m going on leave my deputy [Benjamin Cudjoe] is going to deputize for me but he should not attend board meetings. Is that how to build institutions?

“Daniel Domelevo this is below the belt. This is very very bad; this is terrible; this is so bad that it should never be repeated in the annals of the history of this country that no public servant should write a letter like this to the Chief of State at the office of the president,” he charged.

Paul Adom-Otchere in his editorial segment on his Good Evening Ghana show Thursday, July 9, 2020, further stated that the actions of the Auditor-General contradict the laws that govern his office.

In a short piece on the matter dated June 29, 2020, the US-based law professor explained the position of the law.

"The reason for the law is to protect his independence. The constitutional amendment of 1964 that brought the AG under the control of the ministry of finance and the ensuing political interference in the work of the PAC [Public Accounts Committee] informed the 1992 constitution framers in making him report directly to Parliament’s PAC, designed to be chaired by a ranking member from the opposition party.

"Thus, the AG cannot be forced to take his leave or to forfeit his leave by the President. Nor can the President direct or control him in the performance of his work.

There must be a compelling reason to force the AG to take his leave. His leave conditions must be determined by the more specific Audit Service Act, not the general Labour Act (generalia specialibus non derogant). I do not find the Mills’ precedent persuasive. Actually, I find it amusing."

Watch below the Editorial of Good Evening Ghana.