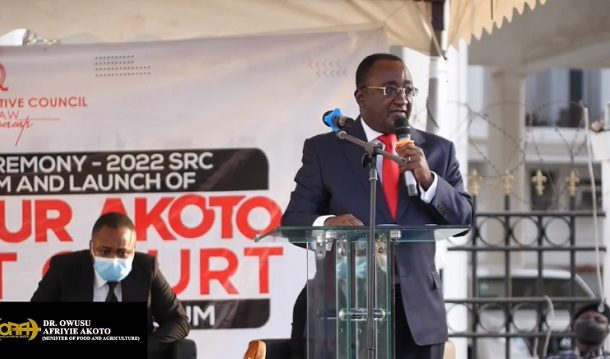 The competition is organised annually as part of the SRC Week Celebrations to honour the memory and sacrifices made by the late Chief Linguist of the Asante Kingdom, Baffour Osei Akoto.

This year's edition is under the theme "Leadership,  Gender and Disabilities Corporate Governance: The way forward after legal education."

The event was chaired by one of Ghana's celebrated legal personalities, His Lordship Justice Sir Dennis Adjei, who is a Court of Appeal Judge.

Delivering his keynote address, the Agric Minister gave a history about Baffour Osei Akoto and how the Baffour Akoto Moot Court Competition came into being.

According to him, the iconic figure is celebrated at the Ghana Law School following his pursuit of human rights, especially the well-being of farmers, women and people with disabilities.

He admonished the students to as people in the legal profession, advocate for human rights, racial discrimination as well as gender and disability inequalities as according to him, those were the sacrifices made by Baffour
Akoto and the likes to bring equality and justice to society.

"In Ghana, you as law students are a privileged group. You will leave the portals of this school to go into the legal profession which is known all over the world as an advocacy profession (Human rights, Racial discrimination, Gender and Disability inequalities). Ten, twenty years from now, most of you will have successful practices and be well to do members of the Ghanaian society," he said.

"The sacrifices that the Baffour Akotos and the Mandelas made to bring equality and justice to society should
not be lost on you. You may be sitting in your comfort zone after school pursuing your profession, that should not blind you to the injustices in society. A lot has been achieved in past years, but a lot of injustices still
remain in our society," he observed.

He added, "It would be your responsibility to uphold the advocacy pursued by our forefathers. As trained advocates, it is incumbent upon you to continually uphold the rule of law to address the inequalities in society which Baffour Osei Akoto and others fought for."