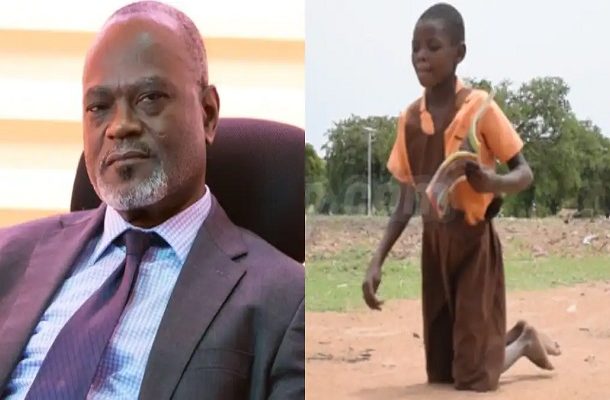 Her story stirred up several emotions when Ghanaians read about the tumultuous journey, she embarks on daily just to get her education.
Agnes Mba, a 9-year-old class one pupil from Dasabligo Primary School in the Nabdam District of the Upper East Region made headlines after her plight was shared by journalist Peter Agengre and published on www.ghanaweb.com.

There have been several crusades on social media with influencer KalyJay and a host of others joining in to help raise funds for Agnes following the publication.

Despite being paralysed from her waist down, a situation she has had to endure since she was 3months old, Agnes has braved the storms against all odds to travel 1.5kilometres to school.

Due to the poor state of her family, with no help in sight, Agnes has over the years been crawling with her lifeless limbs with aid from her arms, as her only means of transportation.

Although her mother sometimes comes to her aid by carrying Agnes on her back to school, she commutes to her school by herself more often than not.

Agnes’ father Abanberinga Mba told the reporter, “When she was growing up, she had difficulty in looking straight at an object. Her neck was still not strong. After some years, there was improvement on her neck and eyes but she could not walk. We tried local treatments to no avail.

"We visited the Bolgatanga Regional Hospital but we were referred to a bones specialist at Bawku. But we couldn’t go because we knew we cannot even pay for any service. So that’s how come she is in this condition.”

Reacting to her predicament, business mogul and CEO of Citizen Kofi, Dr Kofi Amoah has jumped to the aid of little Agnes in order for her to be catered for.

As a show of good faith and assistance, Dr Amoah donated GHC25,000 to Agnes through her parents who are currently in Accra for further checks and diagnoses in an attempt to get her to walk again.

“I saw the difficult situation Agnes is going through, tweeted by GhanaWeb. I was touched and also encouraged by her courage not to give up. Crawl on her knees 1.5kilometres to school and back; this is real bravery and determination to make something out of life,” Dr Amoah disclosed in the presence of GhanaWeb and Agnes’ parents.

To assist Agnes, kindly find below the details:

Watch her video below: