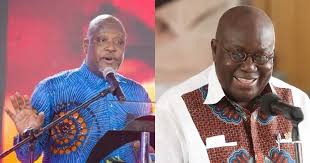 Mr. Kwame Sefa Kayi granted an interview to Nana Akufo-Addo on October 21, 2021 and it looks like the President was exposed beyond measure that the NPP folks want to “kill” Mr. Sefa Kayi for that interview. What the NPP folks don’t know is that Kwame Sefa Kayi is a member of the NPP. He is from the Volta Region and a Board member of the National Petroleum Authority. He was appointed by the President. Kwame is a host of a private radio station. He prepared the questions for the interview and gave the answers to the President.

The interview was an open book thing with the questions prepared by an employee to his employer, who happens to come from the same political party. So why did Nana Akufo-Addo fail the interview? Why should the NPP go after Kwame, if the incompetence, arrogance and the emptiness of the President were exposed? Kwame did all he could to help.
Let me tell you how incompetent, arrogant and emptiness the President is:

*LGBTQ+.* When the President was asked to tell the world about his position on LGBTQ, the President had the greatest opportunity to bring to closure the debate about it in Ghana. Instead, he told the world that the bill is before parliament and he is also waiting for the outcome. The President was very evasive. Clearly, the NPP and Nana Addo support homosexuality.

*Law Students.* When the President was told that he cut a sod at UPSA for the construction for Law Students but nothing has happened there, his answer was “I see.” Which meant the President had been misled by that revelation. That was when he said, students before these current students have had the same issues before, so they should endure it. We are talking of 499 Law students in limbo. It is clear that this is a President whose Law certificate is missing.

*Harbor.* The President said they need to rethink about the idea of building a Harbor in Cape Coast. So Dr. Bawumiah who made the announcement didn’t think before he spoke? Now, can we believe things that are put together in NPP’s manifesto as we prepare for elections 2024? We now know NPP’s manifesto is full of trash.

*Komenda Sugar Factory.* Nana Akufo-Addo said President Mahama had no plan when he built that factory. But for five years, he too hasn’t gotten a plan to revive it. Under pressure, he said the factory will be operational by February 2022. We all can see if a factory can be operational in four months. That Komenda sugar factory is not close to that yet.

*E-Block.* This is where the President insulted the Chief of Aflao and all Ghanaians for voting for and paying our taxes to him. Per the President’s logic, if you are frustrated over non-performance, take the law into your hands and complete what the government should have done for you. Under Nana Addo, our right to demand accountability from the government is long gone.

If not because of short memory on some Ghanaians, how can the NPP come and tell you “breaking the 8?” I have said it that for the next three years, if you are expecting something to change in Ghana that will significantly impact your life positively, then you are a fool. Nothing is left in Nana Addo and the interview has proofed me right.

I have not started writing yet.
Mahama beba.
Dr. Lawrence is the Founder of the Diaspora Progressive Movement in USA