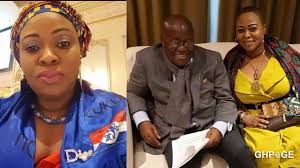 The two most prominent women in Ghanaian politics in 2020 were Tracy Boakye and M’zbel. Even though these two women made over 10 videos but never mentioned President Mahama’s name in them, the NPP did a photoshop and tagged these two women to his name. They nicknamed President Mahama as Papano. That nickname was mentioned even in parliament. It was after the 2020 elections Ghanaians got to know that “Papano” after all, was not President Mahama but Dr. Kwaku Oteng of Adongo Bitters. You see the evil nature of these NPP fools.

Today there is another woman in politics called Evelyn, alias Serwah Broni. She lives in Canada and because of circumstances beyond her control, she has released a 2-hour video in which she didn’t hide the identity of the man she was talking about. This was missing in the case of Tracy Boakye. In Serwah’s video, she mentioned the name of Ghana’s President, Nana Akufo Addo, as the man who had a crush on her and went ahead to “hit” on her.

Everything in this write-up is in Serwah Broni’s video, so nothing is made up. The NPP are silent about the video. It looks like suddenly, a padlock has been put through their month. Nanniama!!!

*LGBTQ.* Serwah Broni said in her video that Nana Addo “hit” on her and on the third hit, she told him that she is a lesbian and doesn’t entertain men. Do we now know why Nana Addo can’t openly declare his position on homosexuality? Do we now know why Gabby Otchere-Darko is questioning the Speaker why he wants the MPs to vote in public on the anti-LGBTQ bill? Do we now know why Akoto Ampaw is the leader of the coalition forcing homosexuality to happen in Ghana? What is the NPP doing in all these. Do you know?

*Staged Robbery.* I must say here that Hopeson Adorye and his National Security criminals didn’t want to kill Serwah Broni, maybe because of her Canadian citizenship. If she where a Ghanaian, they would have killed her on their way from the airport to Golden Tulip Hotel, and throw her body into a nearby bush or river. She had something Nana Addo was looking for. We still have not found the killers of Ahmed Suale and JB Danquah-Adu because they were Ghanaians. Isn’t it why Manasseh Azure was pushed out to South Africa to safe his life?

Even though the NPP didn’t have any linkage between Tracey Boakye and John Mahama, they forced John Mahama to come public about what he knew about that relationship. I am calling on Ghanaians to add their voices to my call and force Nana Akufo-Addo to come public and tell us all he knows about Serwah Broni. Until he tells us, we don’t want to see him at any public event. Since Serwah Broni has already been revealed, we will not be asking too much from him.

I have not started writing yet.
Mahama Beba
Dr. Lawrence is the Founder of the Diaspora Progressive Movement in USA