Dr. Lawrence writes: So Comoros too could beat the Black Stars? 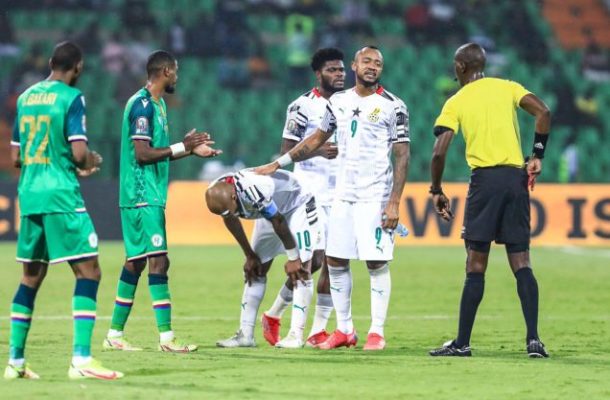 How many times has the Comoros appeared in the AFCON or the World Cup, yet they beat the Black Stars who have lifted the AFCON cup four times and appeared at the World Cup at least 3 times and everything in Ghana seems normal.

Comoros beat Ghana five days ago and yet everybody is still at post including the Sports Ministers and all the Technical team. The blame game is ongoing and nobody is taking responsibility for the record the Black Stars set at the ongoing AFCON in Cameron. Some countries are still playing in the group stages but the once African giants in football have already left their camp. No one knows where they are going.

The coach, Milovan, had said he is staying on because his contract is to take the Black Stars to the World Cup. What an insult to the people of Ghana. Is it by-force that we should play in the World Cup? I mean, if we could not beat Comoros, what country can we beat there? I remember in one of the World Cups, Jamaica was beaten 7-0. That is the record there.

Do we want to be beaten 10-0, to set another record at the World Cup? Is the disgrace at the AFCON not enough for us to pull out the World Cup qualifying match?
Football in Ghana, which used to unite us is now dividing us as never before. This is because of the partisan and tribal turn it has taken and some Ashantis blame the Ayew brothers for this.
Wasn’t it Asamoah Gyan and Agyemang Badu, who openly said they were going to win the 2018 AFCON trophy for Nana Akufo Addo, the President of Ghana at that time? Are the Ashantis trying to tell us they don’t know this history? Wasn’t that the beginning of the partisan and downfall of the Black Stars in world football?

The Ayew father and brothers are the best family towards the development of Ghana football but because of where they come from, some Ashanti sports commentators don’t see it. Is Dede Ayew not the top scorer in AFCON with ten goals to his credit? Who is talking about it? If it had been Asamoah Gyan with that record, these Ashanti commentators would have made the world know. The fire that will burn them has not been created.

So the administration of Nana Akufo Addo could not manage the Black Stars past the group stages? With this embarrassment, I am surprised the Jubilee House is quiet. The Sports Minister and his Deputies should be gone by now. The whole Technical Team should be gone by now. I don’t know if the Football people at the GFA can be fired or they should hold on until the next elections. If they can be fired, they too should be gone by now, if not, they should all lose their re-elections. They can also resign en-bloc to save the little credibility left for them. Then in 2024, the incompetent Nana Akufo Addo, his party and MPs should all be voted out. We need a new clean slate to start developing football again. It’s about time the world sees Ghana as a serious country, at least, for once.

I have not started writing yet.
Mahama beba
Dr. Lawrence is the Founder of the Diaspora Progressive Movement in USA.