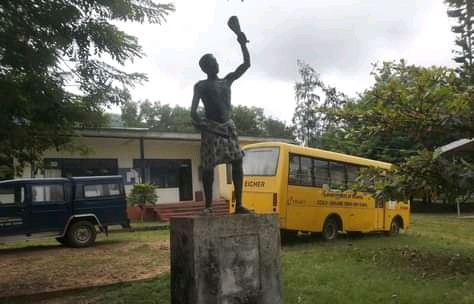 The new governing Board of Dzolo Senior High School in the Volta Region is set to be inaugurated on the 5th of May 2021 .

The Headmaster of the School Mr Mac - Peter Quarquo Dumatonu disclosed in an interview with our reporter , that all is set for the Inauguration of the new Board which on the same day will see the dissolution of the old Board before the new board members are inaugurated .

The School Naval Cadet on the same day will receive a donation of boot sets from a benevolent citizen from Dzolo Gborgame as his support towards the activities of the School Cadet .

Dzolo Senior High School is located at Dzolo Gborgame in the Ho West District in the Volta Region of the Republic of Ghana , the school is a mixed school and  also have both day and boarding status.

The School has always maintained a high academic standards and strictly adhere to it's disciplinary policies in producing best  students .

The Headmaster expressed his appreciation to the Government , the District Assembly and the MP for their continuous support to the school as much as developmental and ongoing projects of the school.

He also thanked the founding fathers and all those who sacrificed to bring the school to it's current status ,not forgetting GES , Region, District and the current staff .

The Headmaster further went ahead to express his appreciation to Dr . Brigadier General Chris Agbeka ( Retired) , Real Admiral Biekro , Mr George Agbeka and others for their great contribution towards the formation of the school's Naval Cadet .

Commenting on some of the challenges of the school , the Headmaster expressed his concern about infrastructure challenges which includes , accommodation for staffs , the school's fence wall , kitchen complex , girls and boys dormitory , administration block , sick bay , assembly hall and additional classroom blocks.

He therefore extended his humble call to the Ministry of Education for allocation of funds for free SHS and other developmental projects of the school and also a special appeal to the government for speedy completion of a 450 capacity boys dormitory which is about 70 percent complete as well as putting finishing touches to a six unit WC toilet facility for the girls by the Ho West District Assembly .

He as well called on other organizations , old students , citizens from the area , individuals and philanthropists to come on board  to compliment and support the great efforts of Government , he believes it should be all hands on deck situation but not limiting every thing to only the Government but every body should get involved .

He Concluded with the believe that he is very much sure that the new Board will continue the good work of the out going Board and as well do more towards the development of the school .