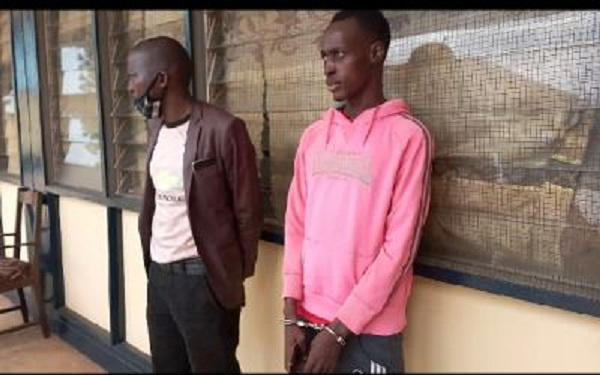 The two EC officials arrested by the police

A 26-year-old Mumuni Abilla, an Electoral Commission official, has been arrested by the Northern region police for conducting registration in his residence.

The suspect, a data entry clerk at the Kpanshegu registration centre in the North East Gonja District of the Savannah region had the BVR kit in his room at Vittin in Tamale.

Investigations by the police revealed that the suspect and his accomplice, one Mohammed Yushaw Kongsoha, a 32-year-old also a registration officer at the same centre had already registered 12 people.

The said BVR was supposed to be operating in the Savannah region but found its way to the Northern region by the two suspects.

Confirming the incident to Starr News, the Northern regional Crime officer of police, Superintendent Otuo Acheampong said the two when questioned said they wanted to register those people to prevent them from joining queues at the registration centre.

The two according to the police would be sent to court after they have been charged with the appropriate offences.

Meanwhile, the NDC in the Savanah region accusing the suspects of doing the bidding of the NPP.

Abdula Malik Bansintale, communications officer of NDC in the Savannah region, noted that the party will continue to be on a watch to make sure that, the exercise does not favour the NPP.

The BVR has since been handed over to the Electoral Commission.

However, both EC directors in Northern and Savannah regions have declined to speak on the matter indicating their headquarters would respond to it.