ECOWAS under Akufo Addo; an elitist manipulation tool for the consolidation of tyranny in Africa 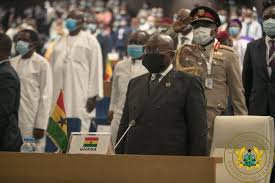 ECOWAS is a useless tool in the hands of tyrants who parade themselves as democratic leaders in Africa. Hypocrites!

What is the justification in negotiating for the return to democracy in Guinea but refuse to call out the election violence in Ghana? Why the pretention to restore democracy when under their very eyes, democracy has been bastardized by the very person they call their Chairman? Who are they deceiving?

Are they not aware of the long winding election battle in Ghana, occasioned by a rigging machinery from the removal of the Electoral Commissioner, Manipulation of Voter Register, Supresion of Voters in the opposition strongholds to the packing of the Supreme Court with Political Judges?

I am amazed at the other ECOWAS leaders who are participating in this useless ECOWAS Summit, having had reports of a state sponsored murder of 9 people in an election in Ghana under Akufo Addo. What kind of hypocrisy is that?

Are the ECOWAS leaders in a deal of "scratch my back, I scratch your back" with Akufo Addo or what?

I don't want to sound a proponent of coup d'etat but it is always important to consider the aspiration of the people of Guinea, other than the age old myopic view of a coups as "an evil act". If a democracy in Ghana would kill 9 civilians, and a coup in Guinea would kill no civilian, which one stands a virtue in the interest of the people? Your guess is as good as mine!

ECOWAS under Akufo Addo is nothing but "an elite gangster", members of which have come together to consolidate tyranny in Africa, instead of democracy. Hypocrites!