Edwinologylab Writes: Rawlings lies in transparent cell, but who will come to his rescue like ’79? 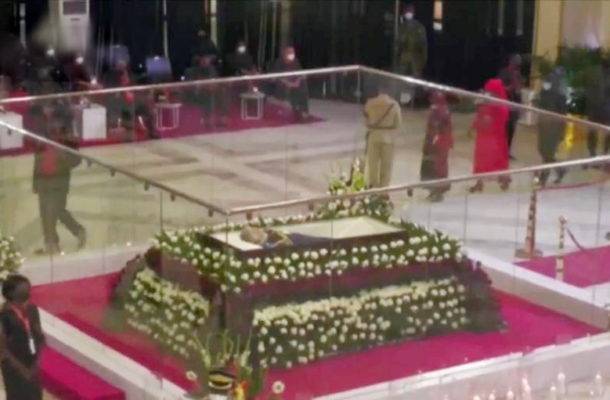 Four soldiers stationed at the four corners of the transparent glass box had their backs turned against Rawlings laid in state.


But Rawlings wouldn’t mind this ceremonial military gesture of grief. At least the soldiers of ‘79 did not turn their backs on him. It was they who made him the insignia of a revolution when they rescued him from his dark cells.

Here he lies in a huge transparent cell. But this time, no one is coming, has come or can come to his rescue.

Death has pronounced a sentence in its typical obey-before-complain style – a style which Rawlings understands too well.

Rawlings has obeyed. It is the nation that is complaining. The suddenness of all this. This evolution into eternity was as sudden as his ’79 revolution.

Rawlings shook and shocked the nation one Thursday in November 2020, boycotting life and the December polls. We are all complaining.

After three months of daily mourning, his wife, Nana Konadu sat before the mortal remains of her late husband – separated by a glass.


Her eyes had withdrawn deeply into its socket.  Her eye lashes, thin, small dark clouds that rained tears. Ever lanky, she looked emaciated in a way that allowed her mask to look bigger across her face than it was perhaps originally designed.

Next to her, her less composed daughter, Yaa Asantewaa looked inconsolable, casting off restraint for her eyes. Being light skinned, the intermittent reddish cheeks exposed a pain which the dark skinned face of her mother managed to hide – a bit.

His son sat with a military stiffness, hands stretched to his knees, eyes focused, body straight.

Inside the casket, Jerry Rawlings looked peaceful in his transparent cage. He would have looked restless in that dark cage in June 1979.

His Wole Soyinka hair, intact. The uprightness of his frame, intact. It was him lying there alright. It’s only that Rawlings could no longer get in touch.

A few of the mourners would scream while exiting. A woman trembled as the reality of death worked its way from her mind and down through her body. And whichever part of her body that emotional train got to, that part signaled the grief.

In a family where his mother passed at 100 years old and his grandmother at 105, Rawlings, at 73, died youthful.

At 73, his larger than lifeness, his looming presence over our nation, we all took his life and living for granted. In his last interview in 2020, with Ghana’s finest broadcaster, Kwaku Sakyi-Addo of Asaase Radio, even the interviewer took this view for granted.

“At 73, looking forward to the future, your own future, I’m sure you will be around for a while.  Your mother is 100, your grandmother was 105, so you’re not going any place soon, presumably,” Kwaku Saki-Addo asked.

Somewhere death would have listened to this question, shaken the head and chuckled.