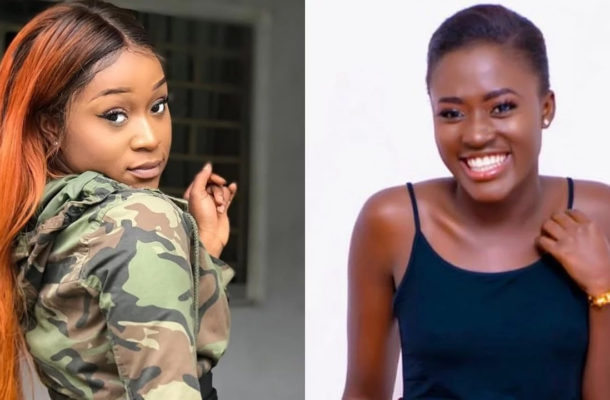 Popular Ghanaian actress and TV presenter, Efia Odo has taken to social media to mock her industry arch rival, Fella Makafui after news broke out that her much-talked about wine shop, located at East Legon, has been completely shut down by her boyfriend.

In a Snapchat, Efia Odo threw a massive shot shortly after the news broke which many have suggested that it was aimed at Fella Makafui.

Multiple sources close to the actress earlier revealed that the Accra-based boyfriend of the actress is upset over her recent lifestyle and lack of attention for their relationship.

The actress is reported to have suddenly withdrawn attention for the boyfriend, whom she has dated for some five years now, even though he rented her current three-bedroom apartment for her.

“She no longer respects the guy. On multiple occasions, she has called for an end to the relationship but anytime the boy tries to move on, her parents will intervene and calm him down.

“This is the fourth apartment the same guy has rented for her. What got him even furious is that recently, he saw a four-wheel drive in the house and when he asked of the owner, Fella gave him a cheeky response and so he decided to end everything and that is why he is shutting the shop, which he rented for her,” the source narrated.

Reacting to the news, Efia wrote on her SnapChat; “When you own your own sh*t no nigga can take it from you,”

The two have been 'beefing' for a while now after Efia Odo accused Fella of sleeping with big men for favours in return.

Their beef trended for days seem to have surfaced with Efia’s latest comment which is clearly directed at Fella and has stirred another controversy on social media.

Efia Odo made several damning allegations against her colleague actress, Fela on snapchat.

According to Efia, the YOLO star sleeps with politicians and “big men” for money, cars and other luxuries she is currently enjoying yet makes it seems she’s working so hard for all she has acquired in the shortest time in her career.

In several video posted on her snapchat, the actress alleges that her colleague actress does not know her worth and therefore give her body to the men for luxury.