Egypt's Ismaily kicked out of Champions League over crowd trouble 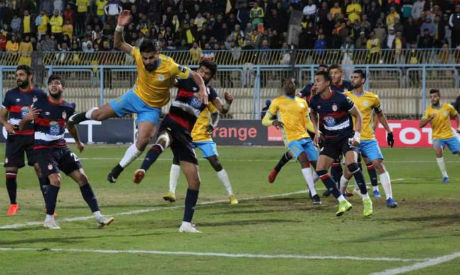 Egyptian side Ismaily were kicked out of the African Champions League after crowd trouble caused their group stage game against Tunisia's Club Africain to be abandoned last Friday, African governing body CAF announced on Wednesday.

Cameroonian referee Neant Alioum called off the game in the dying stages after a lengthy stoppage as Ismaily's angry fans kept hurling bottles onto the pitch, with their side trailing 2-1.

He was escorted from the pitch by security personnel amid unfortunate scenes, around six months before Egypt stages the African Cup of Nations, with Ismailia one of the cities that are scheduled to host the 24-team tournament.

"The organising committee for inter-clubs competitions … has decided to implement the regulations of the competition and officially announce the elimination of Ismaily from total CAF Champions League," CAF said in a letter it sent to the Egyptian Football Association.

"The overall results of the matches in which the team participated in are cancelled without prejudice to other sanctions that may be imposed by CAF Disciplinary Board."

Ismaily are the second club to be expelled from Africa's flagship competition at the group stage in less than three years after Algeria's ES Setif, who were kicked out for similar reasons in 2016.

Africain fell to an early goal from Ismaily's new recruit Benson Shilongo but two penalties from Ghazi Ayadi turned the match on its head, with the second in particular sparking furious protests from the passionate home fans.

Alioum initially awarded a free kick after Yassine Chamakhi was tripped by Richard Baffour on the edge of the area, before changing his mind after consulting one of his assistants. Television replays showed that the contact occurred outside the area.

The second-half kick-off was delayed as tensions boiled over, reaching a climax about five minutes from time when the linesman rushed onto the pitch to avoid being hit by a barrage of projectiles.

With the crowd trouble showing no signs of abating despite repeated pleas from Ismaily's technical staff, Alioum decided to call off the match.

After Ismaily's results were annulled, Algeria's CS Constantine now top the group with three points. TP Mazembe and Club Africain, who both beat Ismaily, have no points.

The top two will advance to the Champions League quarters.