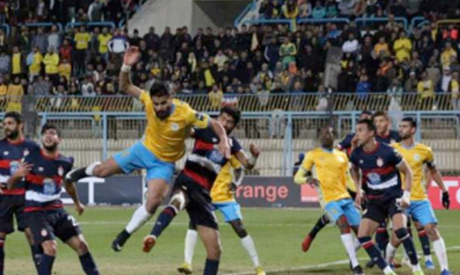 Egypt's Ismaily have been reinstated to the Champions League by African governing body CAF, almost three weeks after they were kicked out of the competition.

A crowd trouble caused a home game against Tunisia's Club Africain to be abandoned.

The club described the decision as "unprecedented" in a statement on their official website.

"CAF held a hearing today … to look into the appeal made by Ismaily against the decision to eliminate the club from the Champions League," the statement read.

"Ismaily based their appeal on article 12 of CAF regulations, which states that fans must invade the pitch or a member of the visiting team be injured to invoke that punishment, which was not the case against Club Africain."

Cameroonian referee Neant Alioum called off the game, which took place in Ismailia on 18 January, in the dying stages after a lengthy stoppage as Ismaily's angry fans kept hurling bottles onto the pitch, with their side trailing 2-1.

He was escorted from the pitch by security personnel amid unfortunate scenes, around six months before Egypt stages the African Cup of Nations, with Ismailia one of the cities that are scheduled to host the 24-team tournament.

"The organising committee for inter-clubs competitions … has decided to implement the regulations of the competition and officially announce the elimination of Ismaily from total CAF Champions League," CAF said in a letter it sent to the Egyptian Football Association at the time.

"The overall results of the matches in which the team participated in are cancelled without prejudice to other sanctions that may be imposed by CAF Disciplinary Board."

Ismaily were the second club to be expelled from Africa's flagship competition at the group stage in less than three years after ES Setif, who were kicked out for similar reasons in 2016. The Algerian side were not admitted back.

The Dervishes, who are making their first Champions League appearance in eight years, lost 2-0 at DR Congo's TP Mazembe before falling against Africain.