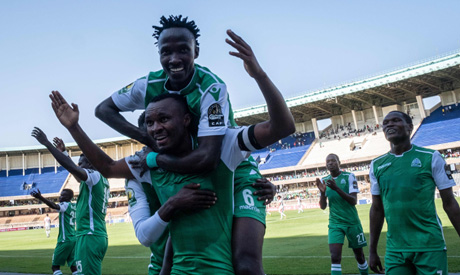 Egypt's Zamalek produced an error-ridden defensive display to slump to a stunning 4-2 defeat at Kenya's Gor Mahia in their opening group stage game of the African Confederation Cup on Sunday.

In an end-to-end first half, Gor Mahia's Jacques Tuyisenge and Zamalek winger Ibrahim Hassan scored two goals apiece as both sides went to the locker room tied at 2-2.

In the second half, Zamalek committed a series of costly and uncharacteristic mistakes at the back, with their players appearing to drag their feet as Gor Mahia took control.

Nicholas Kipkirui put the hosts ahead early in the second half and veteran striker Dennis Oliech ensured the win with a stoppage time goal as Zamalek's shaky defence was torn apart.

The White Knights, who top the domestic league after winning nine of their last 10 games, lie at the bottom of Group D with no points. Gor Mahia lead the group before Angola's Petro Atletico meet Algeria's NA Hussein Dey later in the day.

Zamalek needed seven minutes to take the lead when a half-hearted defensive clearance from a corner fell to Hassan on the edge of the area to fire a left-foot half volley into the bottom corner past poorly-positioned keeper Boniface Oluoch.

But they were then made to pay for a series of dreadful blunders at the back as Gor Mahia created chances at will.

They deservedly leveled the score in the 25th minute when some slack marking allowed a Gor Mahia forward to pull the ball back to the unmarked Tuyisenge who slotted home from eight yards out.

Tuyisenge netted again on 38 minutes when he escaped the attention of Zamalek's Tunisian right-back Hamdi Nagguez, who had a disastrous night, to head home at the far post.

However, Hassan restored parity just one minute before the half-time whistle when he broke clear after a threaded pass from Morocco striker Khalid Boutaib and sent a weak shot that struck Oluoch's legs and went in.

Zamalek poured forward en masse in the second half but they were caught napping at the back numerous times, with Gor Mahia toying with their sluggish defenders.

Kipkirui was left unmarked to send a free header home following a cross from the right to make it 3-2 in the 51st minute.

Zamalek wasted several goal-scoring chances, including a glaring miss from winger Mahmoud Kahraba who mis-hit his effort with the goal gaping.

Gor Mahia heaped more misery on the visitors when the 34-year-old Oliech outran Nagguez to race clear, round keeper Mahmoud Gennesh and fire into an empty net, summing up Zamalek's disappointing night.