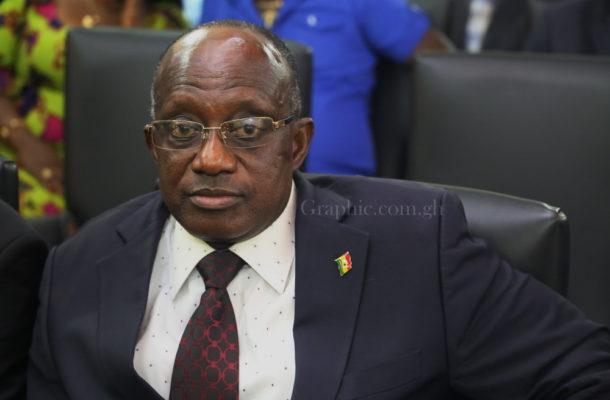 Former Chief of Defence Staff, Brigadier General Joseph Nunoo Mensah, has said that it was wrong for the Ashanti Regional Minister, Simon Osei Mensah to request the presence of the military in Ejura as he is not in the chain of command in the army.

Simon Osei Mensah, made known that he made that request in his position as Chairman of the Regional Security Council, REGSEC.

According to him, he had picked intelligence that the youth of the area had planned to burn the Ejura District Police Station after the burial of social activist, Ibrahim Muhammed, alias Kaaka, who was killed by a mob.

But, Brigadier Nunoo Mensah reacting to this development told Samuel Eshun on e.TV Ghana’s Fact Sheet show: “I don’t have all the facts but I am told the regional minister was in Accra for the National Security Council meeting and of course he ordered the commander to do something.

But what should have happened was that he had to chair the regional security council, discuss what is happening in Ejura based on the intelligence that he had and decide what to do but, in this case, he put out the situation all by himself which was wrong. The honourable commander does not take orders from him”.

According to him, the regional minister could have easily consulted with the army commander, the police and other stakeholders at the regional security council meeting if intelligence was quickly gathered.

He added that in any case it is never right to involve the army as the first point of call in internal security.

“The army is not an internal security institution. The army is there to protect Ghanaians from external aggression. No way will you deploy the army as a first source of adjudication of force. It is wrong. It is never done”, he expressed.

On Tuesday, June 29th 2021, two people were confirmed dead following a clash between the youth of Ejura in the Ejura/Sekyedumase District in the Ashanti Region and security personnel who have been detailed there to maintain law and order.

Four other residents who sustained gunshot wounds were admitted at the hospital for treatment.

The incident happened when the security personnel opened fire on the youth when the latter refused to retreat and were bent on demonstrating to demand justice for the murder of their compatriot, Ibrahim Mohammed, also known as Macho Kaaka, who was attacked by unknown assailants in front of his house.

The deceased were identified as Abdul Nasir Yussif, 25, and Muntala Mohammed, 25.