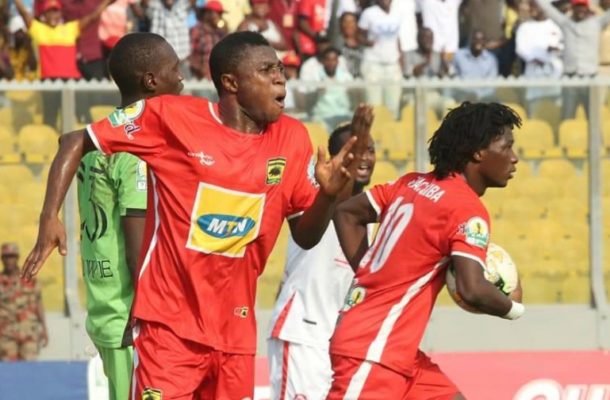 Asante Kotoko will miss the services winger Emmanuel Gyamfi as the speedster joins the injury list of the CAF Confederation cup campaigners.

He becomes the latest casualty of  injury  aside  Richard Senanu and Maxwell Baakoh, who will out 12 weeks.

Head Coach Charles Kwablan Akonnor has revealed that the 22-year-old will not be available for selection in their CAF Confederation Cup as he does not "look good" for Sunday's game.

"I will get the report [on Emmanuel Gyamfi's injury] from the medical team tomorrow...But it doesn't look good," he told OTEC FM

"He will not be available for Al Hilal. I have other players to replace him in our next game against the Sudanese side"

The diminutive winger on Sunday scored the second goal on the 23rd minute for the porcupine in their 3-0 win over Nkana FC but got injured in the process.

He left the field with an apparent leg injury to take the sheen off a brilliant afternoon for the hundreds of thousands of fans who had filled the Baba Yara stadium.

He was replaced by Kwame Boahene after registering his name on the score sheet for the Porcupine Warriors on the  of the game.

The 22-year-old has so far netted three (3) goals in his eight appearances for Asante Kotoko in their CAF Confederation Cup campaign.

Asante Kotoko will be hosting Al Hilal of Sudan in the match-day five of the CAF Confederation Cup at the Baba Yara Sports Stadium on Sunday.