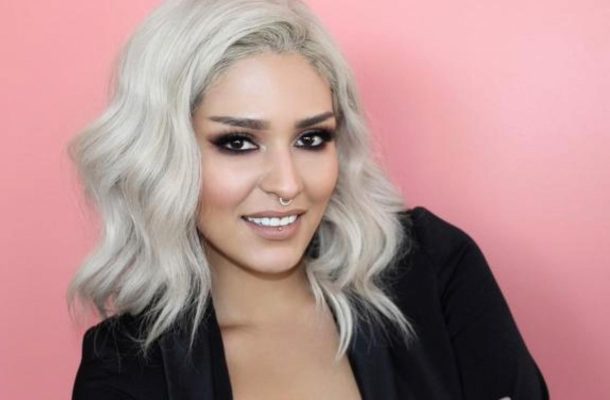 On social media, people's lives don't have to be private, and at least for Lora Arellano, CEO of Melt Cosmetics, that's a very good thing.

"I've always used social media as a way to further my career, and it's always worked," she says.

The makeup artist's client list includes top-notch celebrities like Serena Williams, Rihanna, and Ciara. This is in addition to running a cosmetics brand alongside her colleague and company co-founder, Dana Bomar.

In the past, Arellano says she has used social media to find ways to advance in the beauty industry. But in other cases, her social accounts have attracted opportunity all on their own.

For example, after Rihanna discovered a dead dolly makeup tutorial posted on YouTube in 2012, she invited Arellano to join her world tour. You may have even seen some the artist's looks in "Can't Remember to Forget You" or "Pour It Up."
Today, Melt Cosmetics' Instagram account has 2.2 million followers. The @lora_arellano handle boasts one million followers. It's clear Arellano does not take her Instagram game lightly. She posts looks almost every day. Each shot often garners tens of thousands of likes.

She may be a social celebrity now, but Arellano also had humble beginnings. Here are a few ways the entrepreneur says she used her social networks to help her get recognized.

"I'VE ALWAYS USED SOCIAL MEDIA AS A WAY TO FURTHER MY CAREER, AND IT'S ALWAYS WORKED."
-Lora Arellano,, CEO of Melt Cosmetics
1. Introduce yourself to new people

If there's anyone who knows about the importance of being proactive, it's Arellano. Upon graduating from high school, she dove straight into a nine-week makeup program. After that, she secured her own makeup gigs. And that was no easy feat.

"Freelance was very tough to overcome because it's hard to get your name out there when no one knows about you," she said.

So the makeup artist attended car shows and used MySpace to connect with professionals, especially photographers, who were able to connect her with models.

As you browse the makeup artist's social media accounts, you start to understand who the CEO of Melt Cosmetics is. She's L.A.-based, lives in red lipstick, and is a first-generation entrepreneur.

Arellano allows you to enter her life without having formally met her. That makes sense to this businesswoman, who says it pays to be herself. Being authentic on social media has helped her relate to customers and potential clients.

On her accounts, she shares pictures of her bold tattoos and Schnauzer, Polka Dot. In a filmed Q&A, Arellano even invited viewers to visit her dad's Mexican restaurant and husband's tattoo shop.

Being able to connect with her clients is what Arellano believes sets Melt Cosmetics apart from other brands. Followers can connect the Melt brand with real personalities.

"We'll have an event and thousands of people will come just to see us because there's a face to the brand," Arellano said.

3. Engage with your followers, but don’t take all their comments to heart

For her "Ask Me Anything" video, Arellano crowdsourced questions from Snapchat and Twitter, but interaction with her audience doesn't stop there.

"We still talk to every single customer," Arellano says.

And while the CEO values interaction with her customers, she knows not to take all comments to heart. She regularly receives critiques on her makeup, some more fault-finding than others. Because Melt Cosmetics products take a year to develop from start to finish, she explained that initially it was difficult not to be sensitive. The whole process is hard work.

But over time, she learned to take constructive criticism and apply it to the company.

"You're not going to make everyone happy, and that's what you have to learn," Arellano says. Making most people happy is good enough.