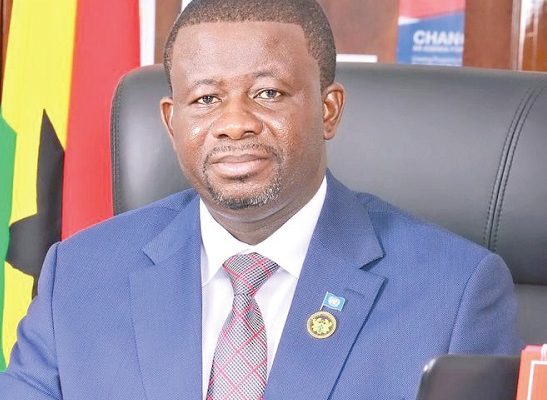 The new NADMO Boss on Wednesday, November 24 was sworn into office as Director-General of the National Disaster Management Organization (NADMO) and as a member of the newly constituted Governing Council led by Brig. Gen (Rtd) Oppong Kyekyeku.

The exercise was administered by the Minister of Interior, Mr. Ambrose Dery at the Conference Room of the Ministry.

In his acceptance remarks, the Chairman of the Governing Council used the opportunity to thank His Excellency the President and the Minister of Interior for the confidence reposed in the appointed council members.

He then expressed gratitude for the re-appointment of Eric Nana Agyeman-Prempeh. The Chairman finally assured the Minister of the commitment and dedication of council members.

The Minister of Interior in his remarks drew attention to the increasing frequency of disaster happenings across the world as well as the increasing intensity with their resultant increasing losses.

The Minister also charged the council to ensure operational efficiency and further emphasized on the need to pay keen attention to the personnel in the organization through ensuring the welfare of the staff and treating human resource matters as issues of great concern.

“I would personally like to also express my utmost gratitude to my political mentor and godfather, His Excellency Nana Addo Dankwa Akufo-Addo for the confidence reposed in me, the Management and Staff of NADMO, family members, and friends who have been of support in ensuring my success.” Eric Nana Agyeman-Prempeh said

NADMO is the government agency that is responsible for the management of disasters as well as other emergencies in Ghana. The board operates under Ghana’s Ministry of Interior.

It performs specific functions which are all aimed at ensuring that in times of emergency, the government is ready to support relief efforts.