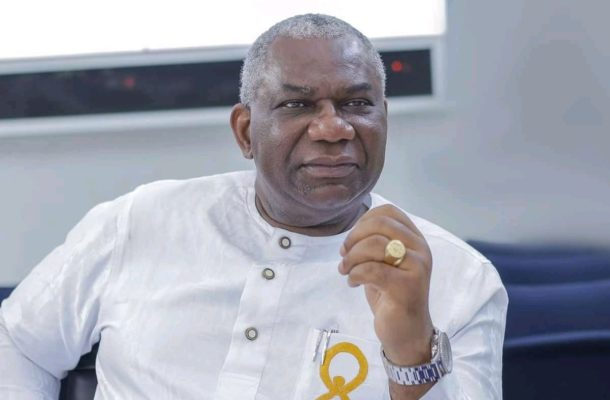 New Patriotic Party (NPP) stalwart, Mr. Boakye Kyeremateng Agyarko, has said he is pursuing his ambition of becoming President and will run down any appointment in the Akufo-Addo led government.

Speaking in Asempa FM interview, the former Energy Minister said although many people have advised him against it, he is focused and does not want to be distracted by any other issues.

“I am working to become the flagbearer of the NPP and to eventually become president of Ghana, hence I will not want any other issues to distract me since I also working at being Ghana’s next president and will commit and dedicate myself fully to it, although many people have advised me against it,” he pointed out.

Mr. Agyarko also opened up about his relationship with President Akufo-Addo in respect to the events leading to his sacking from the current administration.

In 2018, President Akufo-Addo removed Mr. Agyarko from his position as Energy Minister over the Africa and Middle East Resource Investment (AMERI) energy deal scandal, since that incident, the relationship between the two has been rumoured to be frosty.

On the issue of his current relationship with the President, Mr. Boakye said although he holds nothing against Nana Akufo-Addo, he is not in talks with him.

He also said in the interview that, his loyalty to Nana Akufo-Addo blinded him to a lot of things in his quest to ensuring that he [the President] meets the demands of Ghanaians and succeed in his tenure.

According to the firebrand broadcaster, he is disappointed and shocked that all these years that Mr. Agyarko work with Nana Akufo-Addo, he has now realized that latter is not worth dying for.

Speaking on his Black Pot show monitored by Ghanaguardian.com, Blakk Rasta pointed out that Boakye Agyarko can never be accepted by the Ghanaian society as serious person, having harboured a lot of things about the "corrupt" Akufo-Addo government and now coiling out of his shell to make needless revelations.

He said Ghanaians are not fools to trust someone who serves his pay master instead of his nation.

“Who is going to vote you President? You think we are idiots in this country? Boakye Agyarko, when everything was nice and you guys were in there enjoying, you didn't see anything wrong with the corrupt Nana Akufo-Addo government. Now you were caught in a very controversial corrupt deal, now you are saying that your hands are clean and Akufo-Addo government is actually corrupt and dishonest but because of your loyalty you were blinded.

“Now you are here telling us Akufo-Addo is corrupt, yes, he's corrupt but we don't need to hear that from you. Where is your loyalty? What are you doing to make the country stand firm? Boakye Agyarko, I would have salute you for being honest but I'm not going to salute you, not even a cockroach will vote you president in this country,” Blakk Rasta fired.