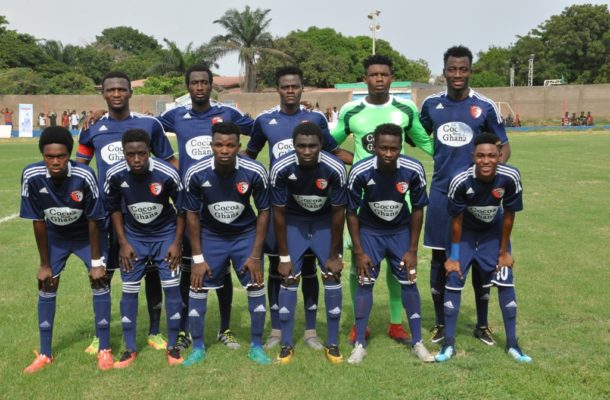 The Academy Boys came into the game on the back of a pulsating 3:1 victory over Liberty Professionals at the Karl Reindorf Park in Dansoman and a near-perfect home run spanning from last season.

The Ogya Boys on the other hand came into the game after drawing 0:0 with Elmina-based Sharks after having been left out of the league’s opening week due to their participation in the CAF Champions league.

The Dormaa-based side started the game on a better note but seemed to lift their foots off the pedal towards the end of the first half as Nuhu Musah produced a powerful header to match an inch perfect cross from Aminu Mohammed on the stroke of half time.

Ghana youth star Aminu Mohammed took the wheel right at the beginning of the second half via a breath-taking free kick in the 52nd minute, recording his second goal from the spot after a similar showing against Asante Kotoko on match day one’s draw game at the same venue.

The highly rated youngster has now scored three goals in as many matches so far after scoring in the first two games.

Klaus Rasmussen’s boys will then go on to control the game with their brilliant passing and inter-positional play leaving Yussif Abubakar’s Aduana chasing shadows and almost begging for the ball.

The comfortable 2:0 win means WAFA have amassed 7 points so far putting them in a good spot for the title even though it is early days yet.

Aduana Stars who automatically have a game in hand after missing game week one will return to Dormaa empty-handed, a point from the Elmina Sharks draw and more to be desired.