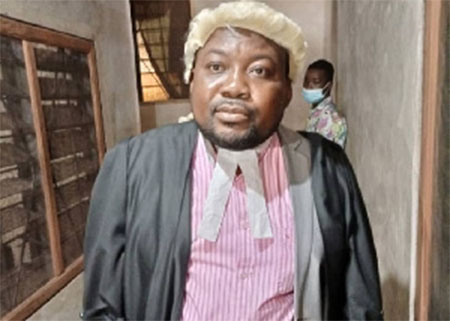 A man who posed as a lawyer and was courageous enough to represent a client in a murder case at the Nyinahin District Magistrate Court, in the Atwima Mponua District of the Ashanti Region, has been remanded into prison custody for deceiving a public officer.

Kyei Baffuor, 39, who has been practicing as a lawyer for some years now, reportedly acted in an unprofessional manner in court, which made the Nyinahin District Magistrate to be suspicious.

The Nyinahin District Court later on made the necessary background checks at the Ghana Bar Association (GBA) and General Legal Council (GLC) and found that the suspect was not called to the Bar.

Kyei Baffuor was consequently apprehended and arraigned before the Akropong District Court, where the request of the prosecution that the suspect should be remanded, was upheld.

The suspect’s plea was preserved by the court and he would be appearing in court again on November 12, 2021, by which time the prosecution would have finished their investigations.

A police report from Nyinahin indicated that Kyei Baffuor has been practicing as a lawyer for about six years now, representing clients in many cases.

The report disclosed that Kyei Baffuor after his arrest, confessed to the police that even though he has done some Legal Profession Courses in California, USA, he is not a qualified lawyer.

According to the suspect, who has some knowledge in law, he also “passed the Law Entrance Examination in Ghana but he discontinued the Law Programme due to some personal reasons.”

The report said, “On 27-10-21 Her Worship Vera Victoria Akonu, the Nyinahin District Magistrate, ordered the arrest of suspect Kyei Baffuor, 39, who claimed to be a lawyer and represented as a Counsel in a murder case titled The Republic Vrs. Selorm Agama before her at the Nyinahin District Court.”

According to the report, “upon the arrest, the District Magistrate intimated that her checks at the Ghana Bar Association (GBA) and General Legal Council (GLC) revealed that the suspect was not called to the Bar. Hitherto, the suspect who, has numerous cases before her court, told the Magistrate that he was called to the Bar in 2015 and gave his licence number as: EAR 21053/21.”

It also said the suspect was arrested and detained for further investigations, before being arraigned, adding that “Exhibits to wit: One wig, a bib and a gown are retained for evidential purposes.”