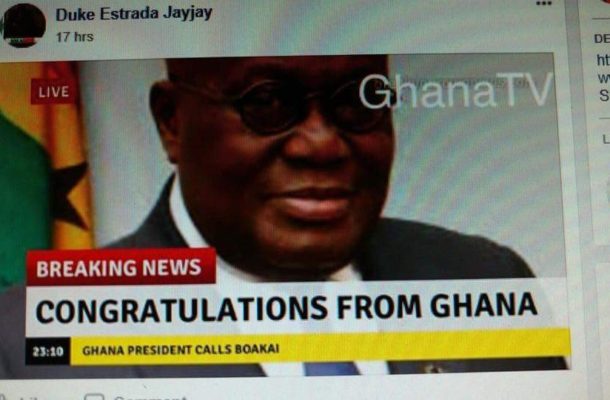 The Flagstaff house has denied sending any congratulatory message to any of the candidates in the Liberian election, Ghanaguardian.com has gathered.

It comes after a fabricated news was released on social media with a superimposed image of Ghana's President Nana Akufo Addo congratulating Vice-President Joseph Boakai  Boaakai.

It came with a headline  "congratulations from Ghana",  suggesting that Boakai has won the election in the West African country.

However Ghanaguardian.com  source at the Flagstaff House has refuted the claim, describing the news as fake, adding that "President Nana Addo will wait until official declaration is made".

Earlier results in the  gathered from the West African country indicates the former footballer Weah has won the election what would be the Liberia's first democratic transition since 1944.

One of the world superpowers France seems to have had insider reports of the result and has already congratulated the former PSG player.

"Congratulations to George Weah who becomes President of Liberia today," Houlie wrote on Twitter, lending credence to the early report of an emphatic victory for Weah even though the electoral commission had not confirmed the result.

The former World Footballer of the Year become the first famous player in the world to clinch the high office of a country after retiring from the game.

The ballot was delayed for seven weeks due to legal challenges lodged by Boakai's Unity Party against the electoral commission over the conduct of the first round of voting, but many of the complaints appeared to have been addressed in the second round.