What Popole Misenga remembers most is the crowd chanting his name.

After a lifetime of war and poverty in the Democratic Republic of Congo, here he was in Rio, competing in judo at the 2016 Olympics as part of the first international refugee team in history.

But now Misenga was down on the mat, pinned in an armlock by his Indian opponent, and seconds from crashing out of the Olympics in just one bout. Nobody, he supposed, would care.

With a supreme effort, Misenga freed his arm -- and won the fight.

Eleven months later, the 25-year-old doesn't look like someone who ever had an arena full of Brazilians cheering him on. You wouldn't guess he's an Olympian. 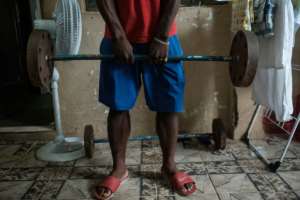 
He lives in a violent Rio de Janeiro favela, crammed with his partner and five children into two, tiny rooms. He's still poor. And he's still a refugee, more than 4,000 miles (6,600 km) from his African homeland.

Yet that moment of glory feels fresh.

"My arm was almost breaking," he recalls, emotion rising in his voice. "Then I heard people shouting 'Popole, Popole, Popole' and I thought, No: if people are cheering for me, I'm not going to give in."

He holds a photo taken of him after the fight, arms raised to the crowd in the arena.

"So much emotion," he says.

During the Olympics, Rio's favelas felt like different planets to the floodlit stadiums and fan zones. Even in ordinary times they can resemble ghettoes for the poor. 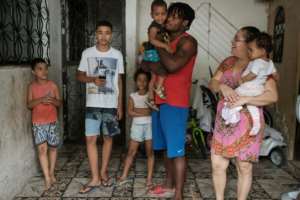 Popole Misenga (2nd R), a refugee judoka from the Democratic Republic of Congo, receives a stipend from the International Olympic Committee that is enough to get by on


In the northern Rio favela of Bras de Pina, Misenga and his Brazilian partner Fabiana have a tiny kitchen and a single box-like bedroom that they share with their seven-month old baby Maria-Eliza, two-year-old son Helias and three children from Fabiana's previous partner, aged six, eight and 13.

"We can hardly sleep," said Misenga, who sports short dreadlocks and massive muscles.

In the dirt street outside, local men accompanied by stray dogs sit under a shack smoking marijuana. Cars rarely pass. There are few shops.

As in many favelas, Bras de Pina is a battleground for police and drug traffickers. Shootouts are a regular danger, as evidenced by a bullet hole in the apartment's front wall.

So Misenga's daily commute to a judo club on the other side of Rio doesn't always go as planned.

Even jogging is perilous: it means crossing rival traffickers' lines.

"They say, 'You don't live here, you live over there, you can't enter here,'" Misenga said. "Running is impossible."

Star for a day

Ahead of the Olympics last August, Misenga was a celebrity.

He was one of just 10 refugees from around the world chosen to compete under the Olympic flag. International television crews flocked to Bras de Pinha to hear his incredible story.

"The Olympics made me famous," he said with a laugh. "People recognized me in the street. They'd say, 'It's that guy in the Olympics!'"

Misenga was just 10 when he was split from his family during the 1998-2003 Congolese war, in which millions died. After fleeing alone into a forest, he ended up living in UN refugee camps and it was there that he learned judo -- and thrived.

The talented athlete won regional championships and made the national team. But sporting success brought new misery at the hands of brutal coaches who locked him in a cage without food when he lost.

When Misenga was sent to Rio to compete in the World Championships in 2013, he fled again, disappearing into the city much in the same the way he'd once hidden from war in the forest.

Along with a female Congolese judoka named Yolande Mabika, Misenga was given refugee status and taken under the wing of the Instituto Reacao, a charity and top-level judo facility in western Rio.

Once named to the International Olympic Committee refugee team last year, they were able to train alongside Brazilian Olympic competitors, albeit with a vastly shorter build-up to the Games.

Mabika was eliminated immediately. Misenga, however, surprised many by earning a second bout.

This time he was up against the world number one and while he had no chance, he fought tenaciously, earning even more deafening cheers from the mostly Brazilian crowd.

Then it was over. Back to the favela.

The fight that counts

Misenga still receives a stipend from the International Olympic Committee, which told AFP it is committed to supporting the refugee team members in ongoing, full time training.

The money's enough to get by and for Misenga to keep going to the Instituto Reacao, but not much else. Unlike many other recent Olympians he has no corporate sponsors.

Fabiana, 34, says things are better than they were a year ago. There's a new fridge, a kitchen table.

"Life has improved in the financial sense," she said. "We have money to pay rent and things for the kids."

However, they yearn for Misenga to find a sponsor, enabling them actually to save money and even to buy their own apartment in the favela.

They're far from that. Right now they worry about the fees Misenga must pay to enter competitions. Just to get to training requires four bus tickets each day.

"I feel very different to the other Olympic athletes," he said. "I don't have a sponsor because I'm a refugee."

With rough Portuguese language skills and little experience outside judo or refugee camps, Misenga would have few job opportunities even if he did quit serious sport.

He talks of boxing and becoming a prize fighter in mixed martial arts. "I'd love someone to come from the United States, saying: 'Popole, you're going to fight MMA.'"

But his biggest fight goes far beyond the judo mat or boxing ring.

"My dream is simple," he says.

"To provide security for my son, for all my family, because one day you get old -- you don't always stay strong. And I have to help them."