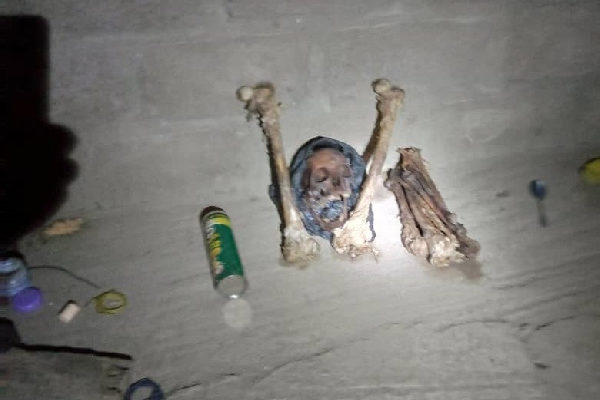 The human parts retrieved from the suspect's abode

The Eastern Regional Police command has arrested a 20-year-old Samuel Asare for possessing some body parts suspected to be human parts.

The arrest was effected on Tuesday, July 14, 2020, after the suspect's father reported the matter to the Akuse Police in the Lower Manya Krobo Municipality.

According to the Police Regional Command, the suspect's father, Amoako Attah on Tuesday morning went to the station and reported that he went to his son's room and found some bones suspected to be human parts.

The Eastern Regional Police, PR unit recounted that together with the suspect's father, went to his house where the suspect's room was searched and the human parts found.

The things parts found were decomposed bones suspected to be human skull, jaw and ribs.

The suspect, Samuel Asare was arrested and sent to the station together with the suspected human parts.

The police said, they also observed that the suspect was beaten up by his father so he was sent to Salvation Army Clinic where he was treated, discharged and sent back to police custody.

Meanwhile, the bones have been sent to the Peki Government hospital morgue for preservation and subsequently be sent to the Police hospital.

The police indicated that suspect Samuel Asare has since refused to answer any question though investigation continues.