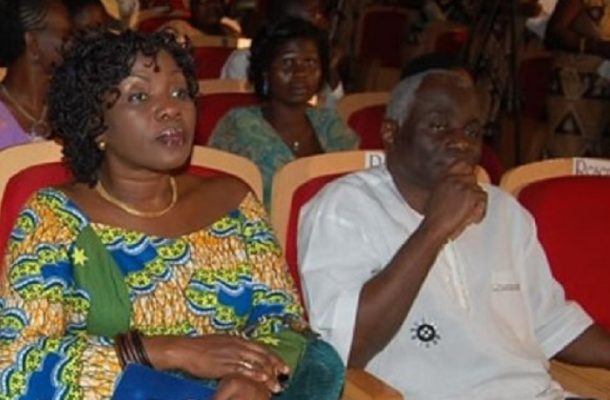 The Chief Executive Officer of Strategic Communications Africa Limited (Stratcomm Africa), Esther A. N Cobbah has described  the incarceration of her husband as the dark days the family had to go through until he[Tsatsu Tsikata] was released from jail.

She claimed she only had to make God the rock and remain prayerful at the time to ease the pain she went through as a wife of the legal luminary who was jailed years back.

Mr. Tsatsu Tsikata was incarcerated under the Kufuor regime, for causing financial loss to the state.

He was sentenced in June 2008 by an Accra Fast Track High Court to five years imprisonment , for willfully causing financial loss to the state and misapplying public property.

The court, presided over by Mrs. Justice Henrrieta Abban, found Tsikata guilty on three counts of causing financial loss to the State and one count of misapplying public property and jailed him for five years on each count.

The sentences were to run concurrently. Tsikata was charged with three counts of willfully causing financial loss of GH¢ 230,000 (2.3 billion old cedis) to the State through a loan he, on behalf of GNPC, guaranteed for Valley Farms, a private company, and another count of misapplying public property.

He is said to have intentionally misapplied GH¢ 2,000 (20 million old cedis) to acquire shares in Valley Farms. Valley Farm contracted the loan from Caisse Centrale, now Agence Française de Développement (ADF), but defaulted in the payment, compelling GNPC as the guarantors, to pay the loan in 1996.

He was jailed 5 year imprisonment after he pleaded not guilty.

But years on after Tsatsu’s release from prison, his wife, Esther Cobbah who interacted with sit-in host Nana Aba Anamoah on Starr Chat Wednesday said she was compelled to visit the Nsawam medium Security Prison on daily basis where his husband was serving his sentence.

“He thought that it was too much for him but I insisted on going. And I’m happy i went because it was in one of those visits on Sunday, I found out that he was almost dying,” she bemoaned.

“It was a difficult time but it was light,” she noted, adding she had massive support from friends and family.

Mr. Tsikata was granted presidential pardon in January 2009, by then President Kufuor, after he had an asthmatic attack that nearly killed him. He spent only about seven months of his five-year sentence.