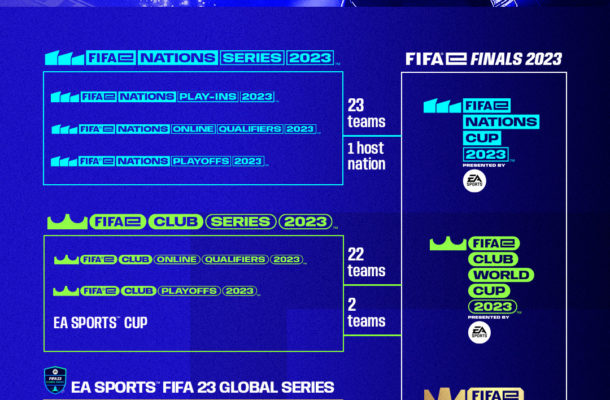 FIFAe has announced the return of the pinnacle of events in summer 2023.

This comes after the success of the first-ever FIFAe Finals 2022 this summer which included a team that represented Ghana.

More nations, clubs and players than ever before are expected to enrol in the FIFAe competitions - which will start at the end of September 2022 -with the world’s top competitive gamers set to compete over the next months to qualify for the FIFAe Finals 2023.

With an updated season format, 24 of the best individual players, clubs and nations will each compete at their series’ pinnacle event, enabling more preparation time, more prize money for individuals and more chances to tell the stories of the competitors.

The FIFAe Finals 2023 will once again be the climax of the season featuring all things FIFAe ranging from esports, gaming, music, fashion and much more.

A total of USD 1.2 million prize money will be distributed at the FIFAe Finals 2023 in addition to the prize pool available throughout the season via various qualification events.

“Following the positive feedback from the FIFAe Finals 2022, we’ll continue to double down on co-creating with fans, teams and stakeholders whilst offering more opportunities for partners with FIFA’s new commercial structure for football gaming and esports”, said Romy Gai, Chief Business Officer at FIFA.

“This season will further cement the FIFAe competitions as the climax for the world’s best and a place for the entire community to share their passion.”

Last season, players from across the globe, over 780 clubs and over 80 nations including Ghana participated in the different tournament series - making it the most engaging season on FIFAe social media channels ever.

As of 2023, brands will be able to take up dedicated partnerships around esports

with the new commercial structure for the first time in FIFA’s history.

In addition to its competitions, FIFAe will maintain focus on creating a positive impact with ‘The Good Game Promise’, which was launched ahead of the FIFAe Finals 2022.

FIFA.GG will continue to serve as the main hub of FIFAe for the upcoming season, where fans and players alike will be able to see results, rankings, fixtures and livestreams from the events.

Media requests can be sent to media@FIFAeFinals.com.

Brands interested in FIFAe partnerships can enquire at sales@fifa.org