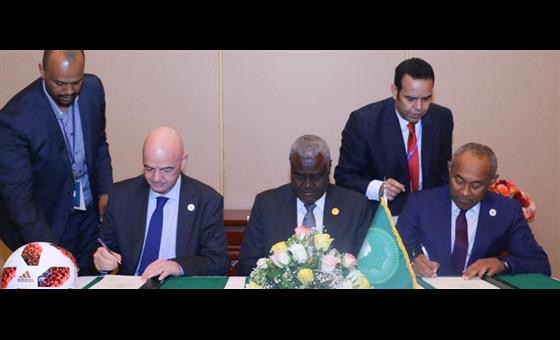 The MoU, signed by FIFA President Gianni Infantino, Chairperson of the African Union Commission Moussa Faki and Conféderation Africaine de Football (CAF) President Ahmad Ahmad will see FIFA, the AU and CAF implement common strategies and programmes with a focus on the areas of education, good governance and the fight against corruption, as well as safety and security at football matches.

Under the new MoU, FIFA, CAF and the AU will join forces to support education using football for all schoolchildren of all member countries of the AU, which will also include the development and training of teachers. This will include the implementation of FIFA’s new Football for Schools Programme, which will see the distribution of 11 million balls to as many schools as possible around the globe while contributing to the development of life skills of children through the promotion of the key values of football.

FIFA has allocated a budget of USD 100 million to the Football for Schools Programme over the next four-year cycle, and pilot projects will start in Mauritania, Botswana and Rwanda soon.

The second pillar of the agreement signed today will aim to promote safety and security at football matches. FIFA will use its broad expertise in this field and work in cooperation with relevant public and private stakeholders. The collaboration will focus on capacity-building on legislative aspects, the development of stadium safety & security management measures and interventions, as well as engagement in best practise exchange across AU countries.

Finally, the three organisations have agreed to collaborate on the promotion of good governance and anti-corruption in sport, in particular through joint actions such as workshops and awareness campaigns against match manipulation and other forms of malpractise in football. Furthermore, joint actions are envisaged to promote good governance among the FIFA member associations in the AU region with key principles such as democracy, gender equality, stakeholder involvement, transparency, accountability, solidarity, and checks and balances.

FIFA President Gianni Infantino referred to the signing of the MoU during his address to African heads of state at yesterday’s African Union Ordinary Assembly saying: “I believe that football can be used as a tool for positivity and to create opportunity. I am looking forward to signing an historic agreement with the African Union and CAF tomorrow that will allow us to work hand in hand to promote education, good governance and anti-corruption as well as safety and security. I look forward to kicking off our shared initiatives and to the strong impact our activities will have on the lives of many people across Africa." www.fifa.com