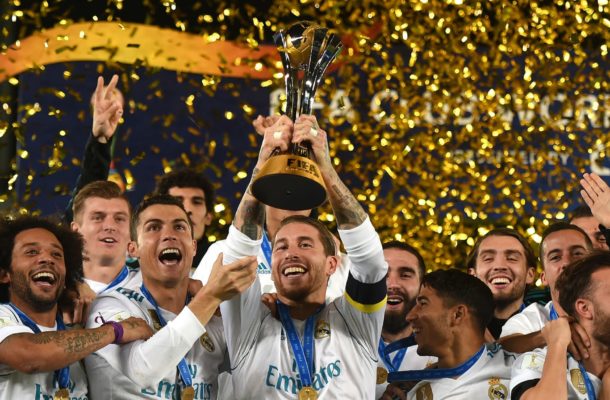 Ahead of final No4 in UAE, where tournament holders Real Madrid take on host team Al Ain, take a trip down memory lane and delve into the highlights of all previous Club World Cup Finals held in Abu Dhabi – from Barcelona leaving it late against Estudiantes to Los Blancos sealing back-to-back Club World Cup titles against Gremio.

Barcelona’s bulging trophy cabinet was, curiously, devoid of a world title prior to UAE 2009. A Juan Sebastian Veron-inspired Estudiantes, meanwhile, were aiming to become the first Argentinian side to lift the Club World Cup trophy. Laden with global stars, Pep Guardiola’s Barça wowed spectators with their irresistible brand of football. But they found themselves a goal down on 37 minutes when Mauro Boselli’s header opened the scoring at Zayed Sports City, Abu Dhabi.

The Copa Libertadores winners were minutes away from global glory when Pedro snatched a last-minute equaliser to take the game to extra-time. Barcelona’s relentless pressure then paid off with an extra-time winner. The scorer? Eventual adidas Golden Ball winner Lionel Messi. UAE 2009 represented Barça’s sixth trophy of the calendar year. “We knew Estudiantes would put up a big fight,” Guardiola said after the game.

A year after Barcelona’s victory over Estudiantes, history was made at the UAE 2010 final. TP Mazembe’s semi-final win over Internacional propelled them into a meeting with Internazionale, meaning a club from outside Europe or South America was involved in contesting the final for the first time. It made the Congo DR club’s success all the sweeter after exiting the tournament the previous year with two losses.

There was to be no fairy tale ending for Mazembe in the final, however. Goals from Goran Pandev, Samuel Eto'o and Jonathan Biabiany capped a convincing victory for Inter, who collected a third club world championship trophy, having won two intercontinental titles in the mid-1960s. “It’s a great way to end what’s been a fantastic season for us and it’s the perfect reward for all the work we’ve put in this year,” said Lucio after Inter’s triumph. “It’s a valuable trophy for us.”

Real Madrid made it back-to-back Club World Cup titles with a 1-0 win over Gremio at UAE 2017, following up on their Japan 2016 success the year before. In doing so, Los Blancos became the first side to retain the FIFA Club World Cup trophy.

Cristiano Ronaldo’s second-half free-kick – his record seventh at the tournament overall – was enough to see off Gremio and ensure Los Blancos successfully defended their crown.

“You never tire of winning,” said Sergio Ramos told FIFA.com in the corridors of the Zayed Sports City Stadium last year after Real’s victory. “It’s been an historic year, an amazing year, and it’s taken a lot of hard work.”