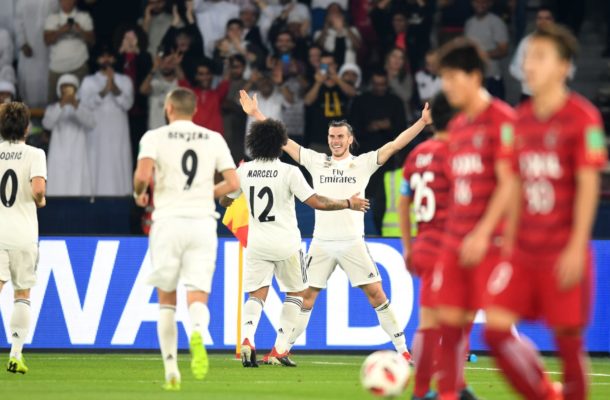 The result means Los Blancos will face host team Al Ain in the showpiece decider on Saturday, while Kashima meet River Plate in the match for third place.

Both sides enjoyed chances in an entertaining first half but it was Real who got the breakthrough just before half-time. After Toni Kroos went close with a strike from the edge of the penalty area, a marvellous flick from Marcelo found Bale inside the danger area and the Welshman unleashed a low left-footed strike which flew past Kwoun Suntae.

After the break, Karim Benzema saw an effort cleared off the line by Shuto Yamamoto. The defender was then involved in Real's second when he attempted to play the ball back to goal only for Gareth Bale to sneak in and get the better of centre-back Jung Seunghyun before finding the net.

Bale then completed his hat-trick - joining Luis Suarez and Cristiano Ronaldo as the only players to do so at the tournament - on 55 minutes by firing into the top corner after being played into the box once again by Marcelo.

The AFC Champions League winners continued to battle and they were rewarded on 78 minutes through Shoma Doi, and his goal was confirmed after a VAR review.