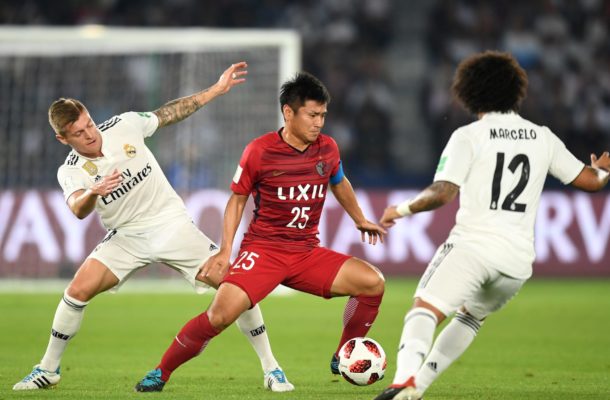 Endo: We now go for bronze

They battled against footballing heavyweights Real Madrid in the hope of reaching the FIFA Club World Cup UAE 2018 final and bettering their result in the 2016 decider, but it was not to be for Kashima Antlers.

The Asian champions suffered a 3-1 defeat against tournament holders Los Blancos in Abu Dhabi; their first meeting since the Japan 2016 showpiece, which Real won in extra time.

In a first half where both teams enjoyed chances, Kashima suffered the blow of conceding just before the break in a game where Gareth Bale would go on to complete a hat-trick to propel the tournament holders to a third successive Club World Cup final.

"It didn’t help that we conceded in the last minute of the first half," captain Yasushi Endo told FIFA.com outside of the Kashima dressing room after the game. "We could have done better had we gone into the second half at 0-0. We conceded and it was hard to come back from that.

"It was a disappointing result for all of us but they are a fantastic side. We just couldn’t open them up, but we never gave up trying."


There were emotional scenes as the Japanese side returned to their changing room after the match. While all-time footballing great Zico, the club’s technical director, stood outside the door compassionately greeting each player on their return, the devastated Kashima players consoled one another after the defeat.

"We’re all fighting under ‘Zico’s spirit’ – that’s what he installed in the club during the very early years," said Endo of the Brazilian, who played and managed Kashima.

"We’re all in this together. Even those who remain in Japan through injury, we’re all here for them," he continued, in a nod to the likes of Yuma Suzuki and Kento Misao who missed the tournament through injury. "We’re a close family and we’re all disappointed with the result."

The next test for Kashima will be on Saturday when they face Copa Libertadores winners River Plate in the match for third place. The Argentinian side suffered shoot-out heartache against host club Al Ain on Tuesday, and like Kashima, will be looking to end their campaign on a high.

"We want to finish off the tournament well," asserted Endo. "We know River Plate are a very strong side with a great tradition. Yes, they lost against Al Ain, but that doesn’t mean they are an inferior team – it’s quite the opposite. They’re going to be strong and they know they have to win, as do we, so it’s going to be a great contest."

As Kashima now aim for a podium finish at UAE 2018, they will be drawing on the experience of playing in the Club World Cup final two years ago. Endo was one of the six starters in Abu Dhabi against Los Blancos who contested that final as the host team two years ago and who returned to the tournament as champions of Asia this time around.

"The experience of playing in the final will help, but at the same time, we’re here as Asian champions this time around," said Endo. "We have the pride and responsibility to show our football and to show the strength of Asian football in this competition. We’re aiming for that third place."