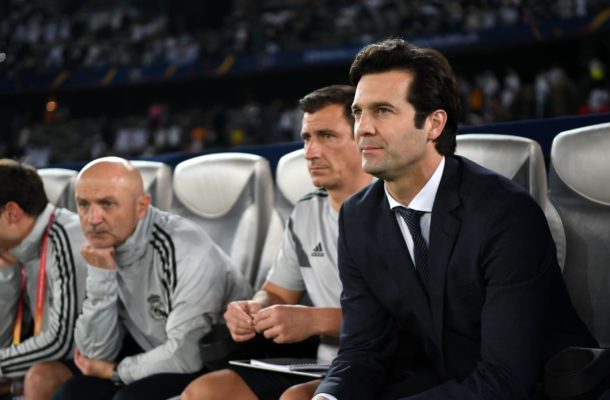 Solari: I love this competition

An ardent fan of the competition, Santiago Solari used to miss school to watch the finals of the early 1990s. Having won the Intercontinental Cup as a player, he is now gunning for FIFA Club World Cup glory as a coach.

"I love the competition. I love the idea of bringing all the confederation champions together," said the smiling Real Madrid coach, in conversation with FIFA.com. "When I was 13 or 14 I’d play truant to go and watch the matches in the bar, because they were on at eight in the morning. It took several months for those dreams to take shape, to think about taking on Europe’s big guns. But it was only once a year, so I didn’t miss that much school."


Recalling the finals he remembers most vividly, Solari picked out one straightaway: "The game River won with an Antonio Alzamendi goal. I was very young." That match was the 1986 Intercontinental Cup against Steaua Bucharest. Solari, who was ten at that time, reeled off the rest in almost chronological order: "The one Porto won against Penarol, Nacional’s win, Milan’s victories, Crvena Zvezda’s, Velez Sarsfield’s…"


Though he was especially delighted to have lifted the trophy in 2002, Solari was quick to point out that the credit for Real Madrid reaching the final at UAE 2018 should go to the players.

"This final is down to a group of players who’ve won the Champions League yet again," he said. "It’s a fantastic achievement and to go and win it for the third year running is an amazing feat. This is their reward. They want to win it and we just go along with that."

The team awaiting them in Saturday’s final are a surprise package, to say the least.


Solari and the Club World Cup


"It’s a final; it doesn’t matter who the opponents are," he said. "If they got this far, then it’s for a reason. They’ve won three matches to get here and have scored a lot of goals too. We have to give the very best account of ourselves if we’re going to win."

Host club Al Ain, who qualified for the competition by winning the UAE league title, defeated Team Wellington, Esperance and River Plate, no less, to set up a final against the European champions.

As a River fan, how did the Real Madrid coach react to their semi-final defeat? Was he sorry to see the club where started out fall short, or was there a sense of relief at avoiding them in the final?

"I can’t hide my feelings," he replied. "I played for River for many years and I’m delighted at all their achievements, but I’m here as Real Madrid coach and I want to make sure things go well for my team. All I’m thinking about right now is the final, which will be tough because there are no easy games in football these days."