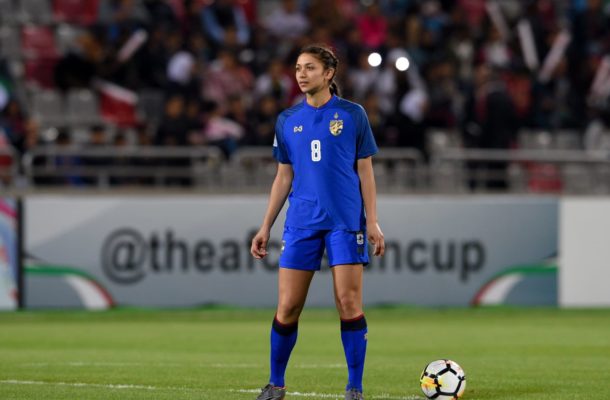 
Suchawadee Nildhamrong was in the midst of studying for her final university exams when the FIFA Women’s World Cup Draw took place. “I was already pretty stressed out,” the Thailand striker reflected. What happened next did nothing to ease her nerves.

Drawing USA would have been daunting enough in any circumstances, and to any player. The Americans are the reigning champions, the most successful team in Women’s World Cup history and are heading into this latest edition on a mammoth unbeaten streak.

But for Nildhamrong, the pairing held added significance. The 21-year-old was, after all, following the draw from California, the US state in which she was born and has lived her entire life. It was therefore understandable that the Thailand star - who goes by the name of Miranda Nild in the States - experienced a “rush of emotions” in the event’s aftermath.

“It was definitely a little daunting at first,” she recalled. “But after my mind settled a little more, I realised what a huge opportunity this is. I get to play against the women I have looked up to since I was a little girl, and the national team that helped me really fall in love with soccer and realise that this is what I wanted to do.

“We'll be facing the toughest team in the world and it is going to be a huge challenge. But I'm excited for it and really thankful to be in this position, playing against my idols. Because if you’d told me a couple years ago I'd have the chance to play in the World Cup, I'd have said you were crazy.”


Which begs the question: how did it come about? What happened in those two years to turn the idea of this University of California student playing for Thailand at a World Cup from fantasy to reality?

“Well, I was born in the US but my dad’s Thai,” said Nildhamrong, taking up the story. “I’ve been playing soccer for a long time and when I got to college, my uncle was in touch with a friend of his who works with the Thailand national team. He happened to be out in the States, so I talked to him, he watched me practice and thought I was good enough to go for a trial. I flew out a couple of months later and everything else followed from there.

“We have a Thai temple here in Berkley and I went every Sunday when I was a kid and learned to speak Thai. We also used to visit Thailand as a family every year. So I feel a really strong connection to the country and I was super-excited when they asked me to become part of the team.

“There was obviously a decision to make too because I was born in the US and could potentially play for the national team here if my career progresses. But when Thailand asked me, I didn’t really hesitate.”

Quick to accept Thailand’s invitation, Nildhamrong proved just as speedy in proving her worth to the cause. A goal against Vietnam in just her second outing hinted at the tall, athletic striker’s potential, and she went on to impress in Thailand’s crucial France 2019 qualifiers, bagging a brace in their 6-1 AFC Asian Women’s Cup victory over Jordan.


But with every other member of the squad Thai born-and-bred, and playing for domestic clubs, were there challenges – on and off the field – in becoming one of the gang?

“Conversations weren’t all that easy at first because my Thai was pretty basic,” she admitted. “But on the training field I found it easy enough to communicate, and my team-mates were really positive, saying to me, ‘We could really do with a player like you’.

“The fact I started well and scored some goals definitely helped. If I’d done badly, I’m sure the transition would have been ten times harder. And my Thai’s improving now – or so my team-mates tell me!”


It is remarkable, hearing Nildhamrong speak in her all-American accent, to then watch her converse so naturally in Thai with her team-mates. And as she looks to a possible future in football’s professional ranks, she is already grateful for the lessons international football has imparted.

“The whole experience has really brought me on as a player,” she said. “It has given me a new perspective on things, knowing that I’m representing not just a team but an entire nation, and not wanting to let anyone down.

“Right now, I’ve just finished my last season with my college team (the California Golden Bears) and I’m training on my own to get ready for the World Cup. Afterwards, I’m hoping to go pro if it’s possible, although I don’t have a set plan. It might depend on how well I play in France!”

Thank you Thailand for letting me play for you ?? it's been a privilege