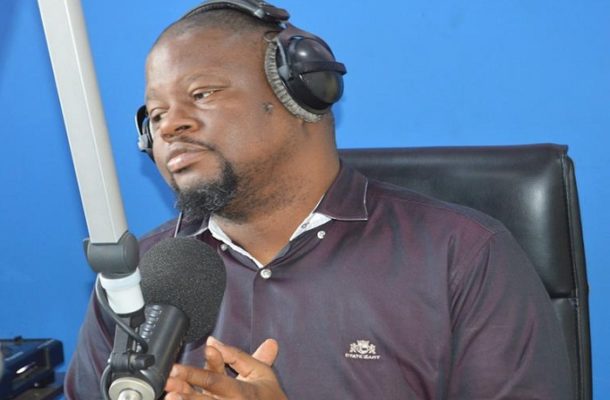 After resigning from Peace FM and joining Kasapa FM for 3 years, it has emerged that, Ghanaian celebrated broadcaster, Fiifi Banson, needs a come back to the Despite world, columnist, P.K Sarpong has alleged.

Fiifi Banson for years served as the host of Peace FM's late afternoon show dubbed 'Ekwanso Brebre' until 2015 when he resigned to join Kasapa FM, where he hosted the station's morning show, 'Anopa Kasapa'. He, however, left his position at the EIB Group in just 3 years over an undisclosed reason. While at the EIB, he also hosted the 'Football Legend' show on GhOne TV.

But P.K Sarpong, talking about how some media personalities flop after they move from one station to another, he attributed the downfall of Mr. Banson to he quitting Peace FM for whatever reason.

"It was supposed to be a giant but progressive transition but turned out to be retrogressive", said P.K. Sarpong

In  his analysis, P.K. Sarpong opined that the veteran broadcaster did not succeed in his morning field as according to him, "The morning show space was dominated by Kwame Sefa Kayi, making it impossible for Fiifi Banson to compete."

He went on to disclose that 'The Dynamite' has tried to find his way back to the Despite world but he has not yet succeeded in doing so.

"We hear of his exit from the outfit and trying to bulldoze his way back into the Despite world. Whether he will succeed or not, only the coming weeks can best tell", P.K. wrote on his Facebook page.

Below is the full writeup:

HOW FAME SEDUCED FIIFI BANSON AND OTHERS AND SENT THEM DOWN THE LADDER.

Fiifi Banson stepped out of the premises of Despite's Peace FM under reasons that dwell in the realms of speculation.

Famed for his witty and humorous handling of the late afternoon show on Peace FM, the man who was the toast of the town would take a step that would define his destiny for the years that lied ahead.

It was supposed to be a giant but progressive transition but turned out to be retrogressive. EIB's Kasapa FM would be his destination.

He took up the morning host role of the outfit. It was a minefield that would consume him as he became a monumental flop.

The morning show space was dominated by Kwame Sefa Kayi, making it impossible for Fiifi Banson to compete.

We hear of his exit from the outfit and trying to bulldoze his way back into the Despite world. Whether he will succeed or not, only the coming weeks can best tell.

Kwame Adinkra, then the morning show host on Angel FM in Kumasi, left the outfit, came to Accra and fizzled out. He went back to Kumasi but could not regain his feet until Dr Kwaku Oteng came back to his rescue.

Afia Pokuaa (Vim Lady) has also embarked on a journey. She has ended her marriage with Multimedia by pitching camps with Despite's outfit, United Television.

Her move is different in so many ways from that of Fiifi Banson. Afia has gone to another big platform where she would not become an extinct commodity in the media space like others.

Fame in the media landscape can be tricky. Many a media person moving from one area to another somehow believes he or she can travel away with the teeming number of people who follow him or her. That's a misconception.

In the music scene, it happened to two artists. Lord Kenya could not carry his support base along with him to the gospel scene. All those people who ardently used to listen to his well-crafted and artistically worded lyrics abandoned him when he became a pastor and a gospel artist.

Ofori Amponsah's meteoric decline in the music industry was precipitated by his move into the Christian world. He hoped that his fans would join him as he ditched his secular songs for gospel ones. He realized later that he had been dreaming for far too long.

Though he has retraced his steps, Ofori Amponsah is still struggling to find his feet in the secular world, musically.

Though a few may achieve a modicum of success when they change course, many regret such moves. Afia Pokuaa has taken the right step in my view, unlike Fiifi Banson.