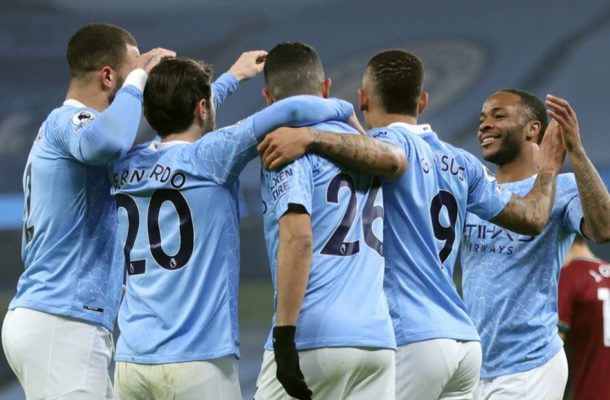 Manchester City were able to see off a resurgent Wolves side as they continued their run of games won and increased the gap at the top of the Premier League table, putting pressure on Manchester United ahead of this weekend's derby.

The game was a lot tighter than the scoreline suggests, as City dominated but found it difficult to put the ball in the back of the net for much of the match (curtesy of Rui Patricio and a keen-eyed linesman).

What doesn't flatter Manchester City however are the stats coming out of the game. It's now 21 wins in a row, and 28 games unbeaten in all competitions with online casinos united states, they're tipping the Citizens to end the season unbeaten. That's staggering, but if you watch City, it isn't surprising. This could well be the best City side we've ever seen, which isn't something anyone thought we'd be saying four months ago.

It's obviously rattled the cages of many who don't appreciate what's happening, and to hammer home a mixed metaphor; the knives are out to try and tear down this team any way they can. Let's forget about them though and revel in five things we learned from yesterday's thaumaturgical victory.

To say Manchester City are dominating games (which I already have) is an understatement. On the ball the passing is slick, quick, and accurate; leaving the opposition little chance of getting the ball to begin with. Once the ball is lost however, the boys in blue become men possessed, the only thought being to press quickly, close out channels for a pass and get the ball back in their possession.

Wolves must have been expecting to see very little of the ball; setting up with an incredibly deep low-block. The first chance they had they took, and saw a brief flurry in the following minutes. But even if they thought they were going to get a second bite at the cherry - all they were left with was the stem.

The Blues stranglehold of the game continued, restricting Wolves to trying in vein to keep the ball out of their net. They were smothered by an onslought of attempts and eventually they cracked. Once the second goal went in, two more came shortly after.

Earlier in the season City were being accused of being mentally vulnerable if they went behind and incapable of getting something from the game. Now, Pep's side haven't trailed in their last 19 games - equaling Arsenal's record. It's all down to their desire to restrict their opponents to as minimal time on the ball as possible.

The player most emblematic of this desire is Bernardo Silva. His pressing off the ball is exactly what we were missing against West Ham - that energy and industry across all areas of the pitch. Against Wolves, Bernardo was high up the field, harassing the defence into giving the ball up, then suddenly he'd be tracking back deep into his own half to squeeze out chances of them making a pass.

For the first goal, Silva makes intelligent movement to drag Jonny away from Mahrez, freeing him up to receive the pass from Rodri and smash the ball across the face of goal.

It's no coincidence that this extraordinary winning run has coincided with Bernardo finding form - but it's not just that. This could be the best form we've ever seen from Bernardo. In seasons past, Pep has taken advantage of the Portuguese's versatility and utilised him wherever a place in the team needed filling. Now, he's undoubtedly in his best position. Whether he'll have to share that with De Bruyne and Gundogan remains to be seen.

This match saw another slight tweak to the 4-3-3 formation we've become accustomed to under Guardiola. Obviously it's never rigidly structured and most recently we've seen three at the back, with one of the full-back's roaming free in midfield. Here, Cancelo acted more as a wing-back staying high on the left, occasionally switching places with De Bruyne. You can visit online slots for an extensive list of new No Deposit casinos available in 2021, which features an option to sort the featured sites by free cash or free spins bonus deals.

It resulted in more of a 3-1-4-2 formation which led to some interesting conclusions. Gabriel Jesus and Raheem Sterling shared the central forward role, providing an extra man in a crowded box, while the width was still maintained by Cancelo and Mahrez. It proved effective enough to put City in front and perhaps gives us the hope of seeing more of Sergio Agüero if he doesn't have the sole responsibilities of his position.

This also highlighted Rodri's importance to the team. As the anchor of the midfield he was required to keep the ball moving in the build-out from the back while under pressure, recover loose balls to prevent counters, tackle and intercept. He made one mistake in the second-half which saw him lose the ball, and suddenly Wolves were five to three through on goal. It's an immensely difficult role to take on and the fact he's come so far in such a short time to be relied on his heavily is a testament to his world-class abilities.

Kyle Walker has come under a bit of flack from fans in recent months, seemingly because he isn't Joao Cancelo. Walker doesn't have the same technical qualities going forward and his crossing attempts in recent games haven't been up to standard. But fans forget what a bright start to the season he had - and the qualities he showed in those games have been on display recently as well.

There were two notable occasions in this match within five minutes of each other, where Walker's pace and positional wherewithal snuffed out chances for Wolves to get through on goal. It's remarkable that his position at right-back is somehow being viewed as old-school because Cancelo's role is more inventive. Often the England international has been acting as a centre-back as well, just as he does for the national team. This in itself is a sign of his defensive versatility.

Cancelo has also been showcasing his skills at defending, making some vital tackles and interceptions in this game. Again, this match has shown us that it isn't a choice between Walker or Cancelo in the side, and quite possibly our best starting eleven has both of them in it.

With 80 minutes on the clock and City inexplicably drawing after nearly two-halves of complete dominance, I'm sure a lot was already being written about that key word you keep hearing - profligacy.

Thanks mainly to Rui Patricio and the low-block in front of him, chances from Sterling, De Bruyne, Jesus and Mahrez had all gone wanting. But the pressure was maintained and pushed on by this historical winning run. City didn't give up. Gabriel Jesus thrashed the ball into the back of the net after a deflection and shortly after two more loose balls were taken advantage of and slotted home.

It wasn't a case of being in the right place at the right time; the way the team was set-up undoubtedly resulted in the forwards finding the ball at their feet for the goals, but a lot has to be said for their persistence and being undeterred by missed opportunities.

Mahrez in particular is on fire at the moment. His sublime first touch and quality on the ball has always been there, but also the Algerian has massively upped his game in terms of pressing, and making the right choices when they're presented. Against Everton, he knew to cut inside and deliver his trademark curler, while against West Ham, he knew to deliver the right pass to Stones to slot home. This hasn't always been the case during his time at the club, but it is now and was used to great effect in this game.

Compliments also need to be paid to Gabriel Jesus. Criticisms are often made of his end product and lack of confidence, but similar to Bernardo his contributions to the team in other ways are immeasurable. Hopefully he can build on the goals he's scored here and finally cement himself in City's best eleven.