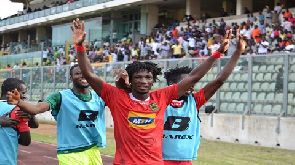 There is never a conversation about the Ghana Premier League and it's standards or lack of it without the sub-plot of player movement.

As the crowds have dwindled across the grounds, the talk has more often than not become one about talent and the rate at which they leave the country at the earliest opportunity. One or two good seasons in the Ghana top-flight has become the de facto right of passage to any league outside the country, with destinations such as Tanzania, Congo, Zambia and the far East increasingly popular among agents and players.

Often overlooked, however, is the flow of players in the opposite direction. As it stands, there are 25 foreigners in Ghana's top-flight, almost all from West Africa.

Congo's Oba Ikana Ulitch, who plays for defending league champions Aduana Stars, is the exception. In fact, Stars have four foreigners on their books.

"It is cheaper to buy players from West Africa when you factor in the scouting process and the fact that, because of proximity, the environment is familiar for many of them," the club's CEO Albert Commey told KweséESPN.

Commey explains that the heavy presence of West Africans is also largely due to the regulation on foreign players in Ghana's top-flight.

"The regulation allows us to register five foreign players [in the squad] if they are from the sub-region because of the free movement within West Africa, but you are only allowed to play three in a particular game."

AshantiGold Stars are not the only club heavy on West African talent. AshantiGold have three, while WAFA -- with one of the most extensive scouting networks in the sub-region because of their academy operations -- have four.

Inter Allies employ four as well, including three Nigerians and the Niger international Victorien Adebayor, who is joint top scorer in the Ghana Premier League with seven goals.

Commey adds that goals are a prime consideration when scouting for foreign talent because "we have complained constantly about the quality of strikers in Ghana, so the solution has been to look outside our borders".

AshantiGold have been driven by the immense talent of Ivorian Richard Dodji for much of this season, and chief executive Frederick Acheampong says to sign talent from outside Ghana, they must be exceptional.

"The cost implications are huge so the players must be worth it ... they must be special," he told KweséESPN. "It is one of the reasons why most of the foreign-based players in the league are strikers and offensive midfielders."

One such player is the Burkinabe Sogne Yacouba, who has become Kotoko's go-to man in recent times.

"I came here because the experience is different and I feel it is good for my career and progress," he says. "There is a certain physical edge and intensity to the game here that is better than what I was used to back home."

Foreign players, especially from the sub-region, in the league are far from a new trend. AshantiGold's dominance of the competition in the early to mid-90s was facilitated in large by the remarkable Togo duo of goalkeeper Nibombe Wake and forward Kossi Nousoudji.

Their compatriot, Akakpo Patron, was also a key member of the Asante Kotoko team that lost the 1993 CAF Club Champions Cup. Patron works as an assistant coach at Kotoko now, and believes more foreign players can only be good for the Ghana Premier League.

"All around the world, the best leagues have opened up to players because it simply makes the football better," he told KweséESPN. "And you can see the evidence of that so far in this Ghana Premier League season."