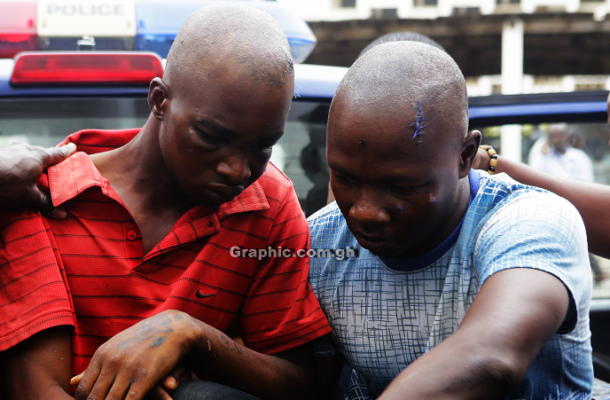 A member of the gang that robbed a forex bureau at Kaneshie in Accra of GH¢150,000 in March this year was yesterday sentenced to 21 years’ imprisonment with hard labour by the Accra Circuit Court.

Haruna Abdulai, aka Borbor, was sentenced by the court, presided over by Mr Aboagye Tandoh, after he (Abdulai) had changed his plea from ‘not guilty’ to ‘guilty’.

Since the start of the trial in March this year, Abdulai, together with the other accused person, Yakubu Alhassan, had maintained his innocence and pleaded not guilty to the charges of conspiracy to commit crime and robbery.

At yesterday’s hearing of the case, however, Abdulai made a U-turn from his plea of ‘not guilty’ to ‘guilty with explanation’.

He informed the court that his motive for committing the crime was to get money to expand his auto mechanic shop.

“I am a mechanic and I was looking for money to buy tools and spare parts to expand my business,’’ he said.

To mitigate the sentence, his counsel, Mr Joseph Kaponde, appealed to the court to temper justice with mercy because he (Abdulai) was a first-time offender.

He also told the court that Abdulai had admitted to his guilt and not wasted the time of the court by going through a full trial.

“He was also severely beaten by a mob during the robbery incident. This has led to impairment of his speech,’’ Mr Kaponde explained.

In sentencing Abdulai, the court dismissed his explanation for committing the robbery.

“He did not raise any plausible defence with regard to the explanation,’’ the presiding judge said.

The court, however, convicted and sentenced him on only the charge of robbery and deferred the sentence on the charge of conspiracy until the determination of the trial of Alhassan, who still maintained his innocence.

That trial will continue today.

The facts of the case, as presented by the prosecutor, Chief Superintendent of Police Mr Duuti Tuaruka, were that on March 23, 2016, Abdulai and Alhassan, in the company of two others now at large, went to the Best Nascent Forex Bureau at Mpamprom-Kaneshie on the pretext of conducting business.

He said the gang, immediately after entering the bureau, took the manager and two workers hostage at gunpoint and robbed them of all the monies in the safe and drawers.

One of the workers, he said, raised an alarm which led to the arrest of the two accused persons by a police patrol team and other people at the scene.

“When Abdulai and Alhassan were being chased by the mob, they fired indiscriminately at the people. In the process, 14 people sustained gunshot wounds,” he added.

He said a search by the police on the accused persons revealed GH¢58,000, two locally manufactured pistols and 21 live cartridges.