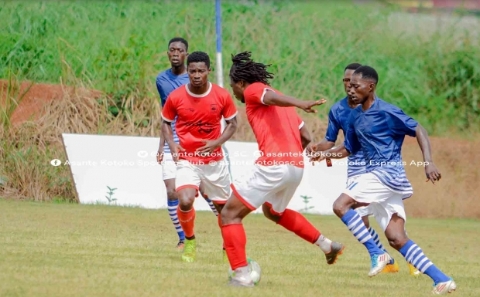 The game reminded everyone of the talents of fan favourite Sogne Yacouba who is now a forgotten man as he grabbed a hat trick to send a message to the technical team and  management of his relevance to the side.

In the absence of the Burkinabe import Kotoko were knocked out of the Caf Champions league by Tunisian side Etoile Sportive du Sahel, although a lower tier side but it was a no brainer the importance of the embattled striker to this Kotoko side.

The porcupine warriors have stepped up preparations for the  CAF Confederation cup playoffs after drawing Ivorian side San Pedro Fc.

Kotoko were obviously the better side for much of the game and ended up beating comfortably their opponents who offered rare resistance by 4 goals to nil.

Yacouba broke the deadlock with a well taken strike before adding gloss to the score by scoring two more.

Uganda strike George Abege who has struggled in front of goal since his move from Kairobangi Sharks added a fourth to seal an emphatic victory for the porcupine warriors.