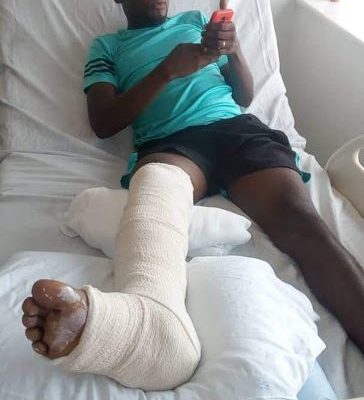 Sweet turned sour for former Hearts of Oak defender Emmanuel Asong as his return to the Accra Sports Stadium saw him break his leg in ceremonial match.

The 29-year old sustained a career-threatening injury in Wednesday's 62nd Independent Day clash  between ex Hearts of Oak players  and their counterparts from kotoko.
The former Black Starlet captain was carried of with a broken ankle out of a late tackle from Kotoko's Osei Akoto.
The former Heart of Lions star lasted for only 20 minutes after replacing Aquah Harrisson  in the 50th minutes.

He was immediately carried in ambulance to the hospital as all players got clearly distressed and could not watch the terrifying scene.

He had shown glimpses of brilliance with his surging runs and in such moves got him toubled by Osei Akoto's horrendous tackle at a moment the phobians looked more threatening to increase their lead.

The Phobians perhaps got demoralised after watching the former great Olympic star remained lying on the pitch in pain and conceded an equaliser through Frank Osei.

But they still went on to beat  their Kotoko counterpart on penalties to win the 62nd Independence Day cup in Accra.
Alex Takyi Mensah scored the winning penalty in the shootout to see off the ex Porcupines following a 2-2 draw.
Wisdom Abbey put the Phobians ahead in normal time before Charles Taylor doubled it up with a penalty, following a bad tackle by Joe Hendrix.
But former goal poacher Eric Berkoi reduced the deficit before the half time break.