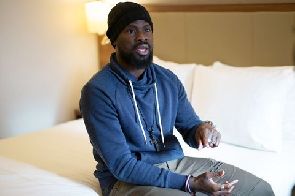 Former Ivorian International Emmanuel Eboue has been rescued by former Club Galatasaray as the Turkish giant makes a timely offer to appoint him as an assistant coach for their under 14 side.

The announcement by the Turkish club comes as a lifeline after the former Arsenal defender revealed he had contemplated suicide after falling on hard times.

Gala boss Fatish Terim, who has taken over at the Istanbul club for the fourth time in his career, told CNN Turk that he would give the former Ivory Coast full-back the role of under-14 assistant coach at the club.

Terim said: 'We heard news about Eboue in the dressing room, I was informed there, we will do whatever we can to help my friend.'

Eboue, who played in the 2006 Champions League final for the Gunners against Barcelona, earned millions in a seven year Premier League career, slept in a palatial home and drove expensive cars, was said to be delighted at the offer.

A soccer website, Futbolarena Turkey, said Eboue will begin work as he aims to obtain a coaching licence. The Istanbul side will rope him in, give him an accommodation and a decent salary as he works his way up the ladder.

I can’t afford the money to continue to have any lawyer or barrister. I am in the house but I am scared. Because I don’t know what time the police will come. Sometimes I shut off the lights because I don’t want people to know that I am inside.


He had a playing stint with the Turkish giants between 2011 and 2016 having transferred from Arsenal. He played 77 games and score four goals during his stay.

The ex-Arsenal man admitted to being pushed on the brink of committing suicide given the turn of events. “I want God to help me,” he says. “Only he can help take these thoughts from my mind,” he told the Sunday Mirror.

He said a court has awarded all his earnings to his estranged wife adding that he has not seen his children since June this year. He is currently unable to play due to ill-health and also has a FIFA ban around his neck after a row with his agent.

The player said he had no money to hire a lawyer and bailiffs were after him to serve him with documents to hand over his apartment to his wife.

According to him, to evade the court officials, he had resorted to sleeping on a mattress at the home of a friend and that whenever he was home, he turned the lights off and packed all his remaining belongings behind the door.

“I can’t afford the money to continue to have any lawyer or barrister. I am in the house but I am scared. Because I don’t know what time the police will come. Sometimes I shut off the lights because I don’t want people to know that I am inside. I put everything behind the door,” he said.

He admits to being naive with money and signing all documents that his wife presented to him. He adds that he more often than not signed bank documents without knowing exactly what they said or meant. His wife Aurelie has yet to respond to the allegations.