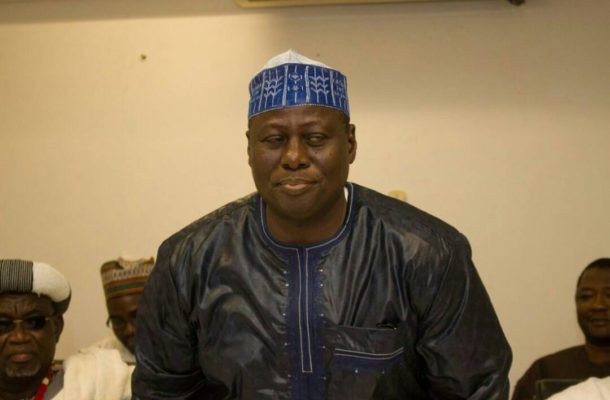 Prince Imoro Andani, a former Minister for the Northern Region, has stoked a big fire by rubbishing the Dagbon Traditional Council's decision not to cede any land for the creation of a new region in the north insisting government's move is long overdue.

Andani's public put down of the decision by the overloads of Dagbon  has put him at loggerheads with the powerful chiefs that could end his political career in the north.

Government has served its notice of the creation of a new region by revealing that Dagbon will cede parts of its land for the creation proposed Eastern Corridor Region.

However, the Dagbon Traditional Council has slammed by the move by government ’s caution that it will not release any of its current lands for the creation of the new region.

And the former Northern Regional Minister has come out in force to defend government by rubbishing the resolution by the chiefs insisting the vast nature of the Northern Region in terms of its land mass calls for the creation of a new region.


“There is the need for us to have an additional region as the eastern corridor region because of the region’s vastness for ease of management and for the purposes of development,” Andani said.

“Having being a former Northern Regional Minister what I noticed was that, it was very difficult to access all the inner parts of the region.

“If you had to travel to visit just the district capitals, it will take you three good days non-stop to go round all the districts.”

As a social development expert, Prince Imoro Andani further advised the Dagbon Traditional Council, saying, “We must critically look at this from the development point devoid of that kind of ethnicity or tribalism because I don’t see this position different from when we talk of Gonjaland.”

“The essence is that, we are a country and we must harmonize and live with each other and so the focus must more be from a development point. If we are Dagombas and we have all the size and then we can have one traditional council, live in one region and we are not developing, is that what we are looking for,” he asked.

Prince Imoro Andani advocated for broader consultations with all the major stakeholders in the Dagbon Traditional Area to arrive at a unanimous decision on the matter.

“This will need further discussions with our chiefs and people of the region for us to look at the development of our area from a modern point for management purposes. There is the need for the region to be split, and in fact the eastern corridor. And what do we lose as a people if we have the eastern corridor region with Yendi as a capital? It adds to the value, it doesn’t subtract,” he stressed.

The Council at a recent meeting in Yendi chaired by the Regent of Dagbon, the Kampakuya Naa Andani Yakubu Abdulai, resolved that it will not cede any part of Dagbon lands for the convenience of new regional formations.

“In consultation with the Regent of Bimbilla, it has been decided that the Dagbↄŋ Traditional Council and the Nanung Traditional Council will issue a joint Memorandum to the Presidential Commission of Inquiry on Regional Reorganization, spelling out our demands.”