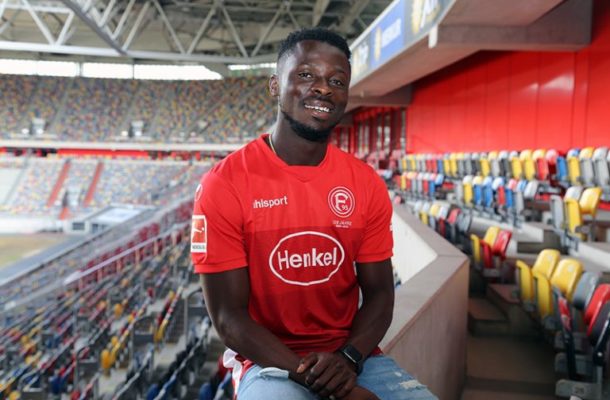 The former Waasland-Beveren attacker tested positive for the disease on Monday along with midfielder Dawid Kownacki the duo have been instructed to stay in self isolation until another  test is conducted.

The relegated Bundesliga club is therefore set to resume their pre-season without the two players from Tuesday as they continue to prepare for life in the German second tier.

The test results came back on Friday with 2 positive cases including Nana Ampomah who joined them after spending the holidays in Beligium.

This informed the team doctor to instruct the playing body and officials involved with the team to stay in self-isolation until a next test is conducted.

With the new test conducted, the health department of the city of Düsseldorf has lifted the self-quarantine on the entire team after assessing the safety protocols adopted by the club.

Meanwhile, the Nana Opoku Ampomah and Dawid Kownacki are to stay in self-quarantine until successive tests confirm their recovery from the disease.

“I would like to express my thanks to the health department in Düsseldorf, which was able to identify who is and who is not, who is known as ‘contact person 1’, through quick and conscientious contact tracking. It has also been shown that our hygiene concept works and that it can be followed up in a short time.

“So now only a small number of people have to remain in quarantine at home”, Fortuna Dusseldorf team doctor Dr. Ulf Blecker said after the quarantine on the entire team was lifted.

He added, “We hope that the people who tested positive have a mild course of the disease”.