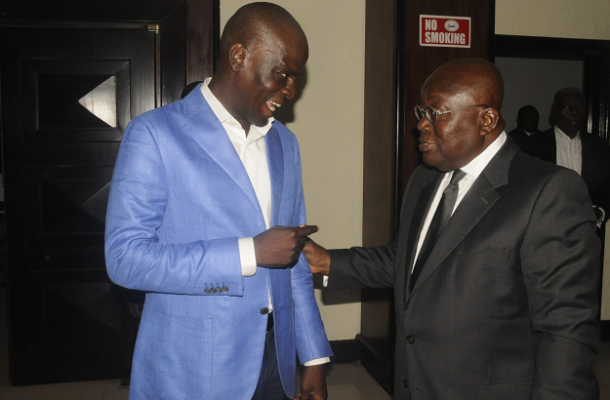 Some flag bearers and representatives of four political parties yesterday outlined their policies, programmes and strategies to grow businesses and create jobs in the country.

At the 56th annual general meeting (AGM) of the Ghana Employers Association (GEA), the flag bearers and representatives also agreed that businesses needed to be supported and more jobs must be created.

The speakers — Nana Addo Dankwa Akufo-Addo of the New Patriotic Party (NPP); a representative of President John Dramani Mahama of the National Democratic Congress (NDC), Mr Haruna Idrissu; Dr Papa Kwesi Nduom of the Progressive People’s Party (PPP), and a representative of Mr Ivor Kobina Greenstreet of the Convention People’s Party (CPP), Mrs Susan Adu-Amankwah — however, disagreed on the policies and strategies that they would employ to grow businesses and create jobs.

The GEA provided the platform for the flag bearers to demonstrate how they were going to improve the business climate and create job avenues for the youth.

The event was also used to elect new executive members for the association.

It was on the theme: “Promoting sustainable economic development in Ghana: Viable policy options.”

Nana Akufo-Addo said unemployment remained the greatest challenge facing the country, given the fact that around 150,000 students graduated every year for the job market.

The NPP flag bearer said an NPP government would expand the productive base of the economy to build a resilient and self-reliant economy.

That, he said, would deal with the current decline in the economy in terms of high inflation, a weak and unstable currency and a high tax regime.

Nana Akufo-Addo said the NPP administration would shift the focus of the economy from high taxation to supporting the growth of the private sector.

On corruption, he said an NPP government would eliminate corruption in the award of public contracts by making sure that government contracts were not based on sole sourcing.

Speaking on behalf of President Mahama, Mr Idrissu said the government had converted the EDAIF into the Ghana Exim Fund to provide funding for small and medium enterprises (SMEs) at reduced interest rates.

He affirmed the government’s commitment to build a stronger partnership with the private sector and urged the sector to build its capacity to improve its performance in servicing loans.

Mr Idrissu said the Electricity Company of Ghana (ECG) and the Volta River Authority (VRA) were distressed because of accumulated debts.

Mr Idrissu, who is the Minister of Employment and Labour Relations, said if the government had not introduced the National Stabilisation Levy to raise money to settle the indebtedness in the energy sector, it would have led to redundancy.

Dr Nduom expressed worry that employers were highly taxed, a situation which made doing business difficult in the country.

Besides, he said, the situation made it difficult to get highly qualified people to work in companies.

Dr Nduom, who described himself as a practicable person by virtue of the jobs he had created, said he had the capacity to transform the economy.

He said the public sector needed to be reformed and indicated that the country did not need more than 40 ministers and deputy ministers to run the affairs of state.

Mrs Adu-Amankwah said a CPP government would expand the industrial sector to create more jobs for the people.

She said the state would be the lead employer in a CPP government.

According to her, the party’s focus would be on tackling the unemployment situation, increasing agricultural production and expanding the manufacturing sector.

Mrs Adu-Amankwah said a CPP government would realign school curricula to match with the needs of industry.