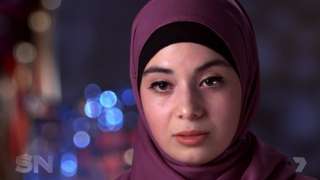 A Muslim woman from Australia has told how she was forced to leave a beach in France for wearing a burkini.
Zeynab Alshelh, a 23-year-old medical student, told Australian media she had travelled to Europe to show solidarity with local Muslim women.
Footage broadcast on Channel 7 showed local people saying they would call the police if she didn't leave.
The ban on burkinis in several French Riviera towns was overruled in August by the top administrative court.
Local mayors who brought in the laws said the full- body swimsuits were a symbol of Islam and potentially provocative after the July terror atrocity in Nice.
French cartoonists tackle burkini ban
French Muslims fear state aims to control their faith
Burkini beach row puts French values to the test
What's the difference between a hijab, niqab and burka?
Ms Alshelh said she and her family travelled to France to learn more about the situation and see if there was "anything that we can do to help these girls just live a normal life".
The video footage aired on the Channel 7 show Sunday Night showed a man threatening to call the police if they did not leave the beach in Villeneuve-Loubet.
Other beachgoers gesture at her or make disapproving comments.
"They weren't happy with us being there, even though it was on the beach that the burkini ban was overturned," Ms Alshelh said.
"It starts off at the beach and God knows where it ends."
Ms Alshelh said the view that Muslim women who choose to cover their hair or face are oppressed was false.
"I just find it ridiculous," she told Channel 7.
"It is a symbol of my faith, it is a symbol of my religion, it is a symbol of Islam and to go out there and wear the hijab, it helps people focus on what's inside rather than what's on the outside."
What is a burkini?
A burkini is a full-body swimsuit that covers everything except the face, hands and feet
The name is a mix of the words "burka" and "bikini"
Unlike burkas, burkinis leave the face free
Burkinis are marketed to Muslim women as a way for them to swim in public while adhering to strict modesty edicts
The French bans have referred to religious clothing and as they were loosely phrased, came to be understood to include full-length clothing and head coverings worn on the beach - not just burkini swimsuits
Burkini creator: 'It's about freedom'
Pauline Hanson, the leader of the anti-immigration One Nation party, last week called for a ban on the burka saying that Australia was at risk of being "swamped by Muslims".
Aheda Zanetti, the Australian woman credited with creating the burkini, said the swimwear represents freedom and healthy living, not oppression.
"It is as Australian as you can get, it was born in Australia and it started off in Australia," Ms Zanetti said.
"Why would they ban something when I designed a swimsuit that was part of integration within Australian lifestyle?"
What French law says on secularism and religious clothing
In 2010, France became the first European country to ban the full-face veil in public
A 2004 law forbids the wearing of religious emblems in schools and colleges
The 1905 constitution aims to separate Church and state. It enshrines secularism in education but also guarantees the freedom of religion and freedom to exercise it. The original text made no reference to clothing