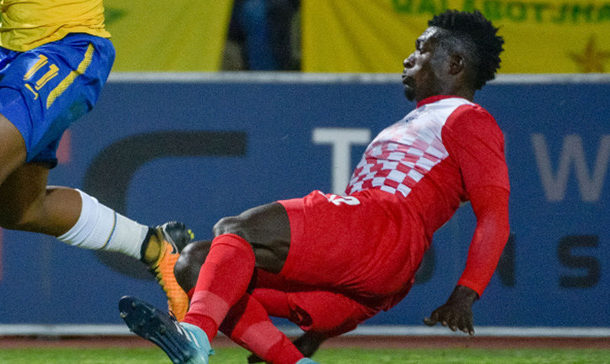 The former Ghana U20 captain has struggled to make a mark at the PSL side and Free State Stars are said to be hankering to replace him with Kaizer Chiefs winger William Twala.

His new Club Richards Bay FC announced the move which will see 24-year old  workaholic midfielder  reunited with coach Jean Francois Loscuito, who he worked with at Leopards when they reached the PSL play-offs last season, along with Sphelele Mkhulise and Khaya Shozi, who were on loan from Mamelodi Sundowns.

“We have signed Mumuni Abubakar from Free State Stars on loan until the end of the season,” Richards Bay chairman Sfiso Biyela tells as quoted by  KickOff.com.

The former New Edubiase star has been reduced to little game-time since he joined Ea Lla Koto from Black Leopards at the beginning of the season, with only three Absa Premiership appearances to his name so far, but will be hoping for an increase in minutes under his belt in the NFD

He sparked controversy when he refused a contract extension from  Black Leopards after they  failed to secure promotion to the ABSA Premier League.

Mumuni Abubakar was tipped for greatness when he earned a trial session with English Premier League side Liverpool in January 2012.

He was adjudged the “2010-2011 PremiershipPlayer of the Year” according to the Sports Writers Association of Ghana (SWAG) but  has struggled to shine abroad.

Abubakar was transferred to Mamelodi Sundowns from then Ghana Premier League side New Edubiase United In 2012 but saw his  has  brightening career got blighted by injuries.