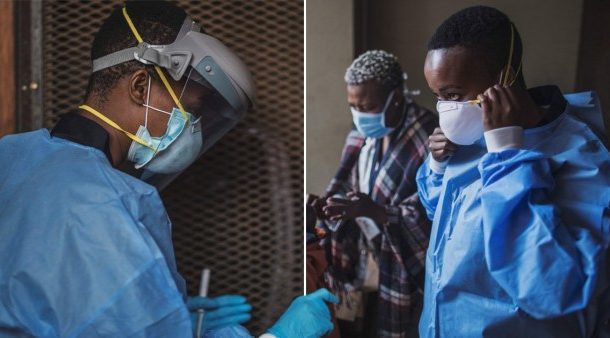 Authorities search a house while enforcing a 21-day nationwide lockdown, aimed at limiting the spread of coronavirus in Eldorado Park, South Africa, on March 30, 2020

A French doctor apologized after suggesting that Africa should become a testing ground for a COVID-19 vaccine, remarks that sparked public outcry on social media.

Jean-Paul Mira, head of the intensive care unit at the Cochin Hospital in Paris, made the comments in an interview that aired last week on the French television channel LCI with Camille Locht, the research director at the French National Institute of Health and Medical Research, Inserm.

“If I could be provocative, shouldn’t we do this study in Africa where there are no masks, treatment, or intensive care, a little bit like we did in certain AIDS studies or with prostitutes?” Mira asked.

“We tried things on prostitutes because they are highly exposed and do not protect themselves.”

Locht responded in agreement: “You are right. We are thinking of a parallel study in Africa to use this same kind of approach with the BCG placebos,” referring to the tuberculosis vaccination that Inserm said appeared to protect children against infections, particularly respiratory diseases like COVID-19.

Their comments triggered a deluge of outrage on social media, including from several leading soccer players in Africa.

“Welcome to the West, where white people believe themselves to be so superior that racism and debility become commonplace,” Senegal striker Demba Ba said on Twitter.