From Gareth Bale to Asamoah Gyan: Top stars who will not feature in World Cup 2018 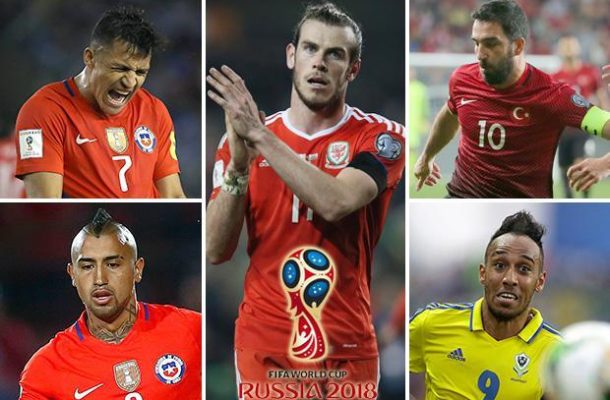 We will begin our list with one of Germany's best players of the season. Yarmolenko, along with Konoplyanka, was a real leader of the Ukrainian team, but this was not enough for to enter the 2018 World Cup. But Yarmolenko managed to perform at Euro 2012 and go to France last summer. And this, in comparison with many colleagues in the Ukrainian team, is quite a serious track record.

Tim Howard and Clint Dempsey (the USA, "Colorado" and "Seattle")

The US team never shot stars from the sky and did not fight for trophies. Fans of the world love the Americans for their real, sincere football, in which there is more emotion than calculation. Eternal goalkeeper Tim Howard and no less eternal leader of Dempsey's will not please the fans with some bright and unexpected victory over some "big team".

This is the fate of the great players from small countries. Dwight York is a great striker from Manchester United, but he has never got an opportunity to participate in a big tournament because he played for Trinidad and Tobago. The Welsh team, naturally, looks more powerful, but in general, the picture is the same. There is Gareth Bale and there is a team of Uls, which is few positions lower than the Madridist. Sometimes this combination leads to successful performances, as it was on Euro-2016, and sometimes - to a trip to the World Cup.

Mkhitaryan repeats the story of Bail. The level of the player is much higher than all other players of the national team. And, of course, Henrikh was doing his best of his team. Armenia began selection with three consecutive defeats, which strongly influenced the ambition to reach some greater level. But Mkhitaryan scored his two goals, becoming the best scorer (along with Koryan) in the qualification of his team.

Once upon a time, Asamoah Gyan was the leader of the strongest African team at the World Championships - Ghana in South Africa in 2010. Then Gyan and the great support of the spectators helped the Ghana team reach the quarterfinals, where Asamoah did not score a penalty in the 85th minute. But the selection system for the World Cup in Africa is built in such a way that the Ghanaians lost the group to Egypt and Uganda and remain at home.

Another African team, which is well known to the average fan. Cameroonian striker Aboubakar is known for goals against Dynamo and Shakhtar in the Champions League. Nevertheless, the strength of the former striker, "Porto" was not enough to defeat the group of Zambia and Nigeria.

Speaking about Dortmund, Yarmolenko should understand Aubameyangin the best way. His team (Gabon), like Ukraine, did not get to the World Cup. The African team failed the selection, and Pierre-Emeric himself did not score a single goal. Remember how "Barcelona" fought for him?

Here, of course, you can enter the entire composition of the Dutch team. The team, which in 2014 became the third team in the world, and after that did not come out first for Euro 2016, now participates in 2018 World Cup. And this is with the participation of very high-quality van Persie, Robben, Snyder. Robben has beautifully said goodbye to the team, sending the Swedes two goals. But this was not enough.

Slovak hero of Napoli. It is always nice to watch his game. But as with many other participants of this list, the rest of the team is below the level of Hamshik. At the same time, Slovaks took second place, but were the worst of those second teams. We do not think that Hamshik is particularly suffering from absenteeism at the World Cup. Still, he had long been accustomed to being the "first fiddle" in a good team, which is losing its matches.