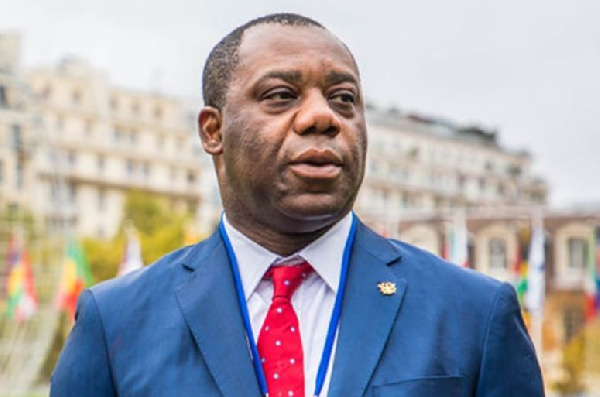 Ghana’s Minister for Energy, Dr. Matthew Opoku Prempeh, who is popularly known as Napo, is in pain and getting frustrated each passing day due to interferences in his role by relatives of the President.

Opoku Prempeh, who is supervising 15 energy sector agencies under his ministry, has allegedly washed off his hands of Tema Oil Refinery (TOR) after people close to His Excellency President Akufo-Addo managed to put pressure on him to get the Interim Management Committee (IMC) he constituted after the dismissal of the Managing Director, Francis Boateng, and his deputy, Mr. Ato Morrison, to pack out and brought in their darling boy Mr. Jerry Kofi Hinson, as the new Managing Director of TOR.

The three-member Interim Management Committee (IMC) chaired by Ing Norbert Cormla -Djamposu Anku among other things was to do comprehensive auditing of TOR.

A few weeks into their role, the IMC uncovered massive rot in the refinery.

A statement issued by the IMC said its investigation uncovered the disappearance of 18 drums of electrical cables valued at Ghc10.4 million, the disappearance of LPG belonging to a client between 2012 and 2015 as a result of which TOR became indebted to the client to the tune of US$4.8 million.

In addition, there was a wrongful loading of 252,000 litres of Aviation Turbine Kerosene (ATK) instead of regular kerosene into BRV trucks at the loading gantry between September 21 and September 25, 2021.

In the process, 14 top management executives were interdicted.

Surprisingly, the Minister’s effort, through the IMC to weed out bad elements from the nation’s premier refinery, seems to have stepped on toes within the government and executives of senior staff association who are allegedly members of the opposition National Democratic Congress (NDC).

Energynewsafrica.com’s sources within the refinery some weeks ago indicated that the Union was putting pressure on President Akufo-Addo’s relative, Mr Gabby Asare Otchere Bediako, to get the interdicted staff reinstated.

The information available to energynrwsafrica.com indicates that two of the interdicted staff were recalled last month and were working when the new Managing Director, Jerry Kofi Hinson, who was the hand man of Gabby Asare Otchere Darko, assumed post few weeks ago.

The latest development indicates that six of the 14 people have also been recalled and are due to start work this by the end of this month, confirming the claim that the Union was putting pressure on President Akufo-Addo’s cousin to get them back to work.

A letter to one of the interdicted staff sighted by energynewsafrica.com reads, “You are hereby declared fully exonerated from the incident and are being requested to report to work on Tuesday 28th June 2022.”

“By a copy of this letter, the Acting General Manager (GM) for Finance is requested to restore your full salary and benefits from the date of interdiction to date, as per the Human Resource Management, Administrative Policies, Systems and Procedures Manual Section 6.3.1 and Article 55 Section 7 of the Collective Agreement between Tema Oil Refinery (TOR) and the Union of Industry, Commerce and Finance Workers (UNICOF).

“Management recognises the inherent difficulties you have encountered in having to stay away from under such anxious circumstances and is appreciative of your patience,” another letter to the senior staff from the Finance Department in our possession stated.

This move by the new management has eroded the confidence the staff had in the turnaround of the refinery.

Energynewsafrica.com checks at the refinery have revealed that there is despondency apparently among the staff.

During the few months the IMC stayed at the refinery, they were able to put control measures in place and have helped to stem product losses.

“We have not witnessed product losses for the past few months,” Ing Norbert Anku, Chairman of the IMC told energynewsafrica.com before their exit.

He told this portal that they had plans to enhance the security of products by installing flow meters at the loading gantry, constructing a new laboratory, refurbishing the gantry and installing a Close Circuit Television (CCTV) at the refinery.

He was of the view that when these things were done, they would go a long way to guarantee product security at the refinery.

Energnewafrica.com is reliably informed that the IMC engaged Intercontinental Energy Consortium and was working very hard to agree with them to come on board as a strategic partner.

Many industry players and watchers are worried about the current situation at TOR.

The question many people are asking is, if the new management claims the interdicted staff are not culpable for the financial losses recorded in TOR, then who are the culprits? Again, who took the 18 drums of cables worth GH10 million?